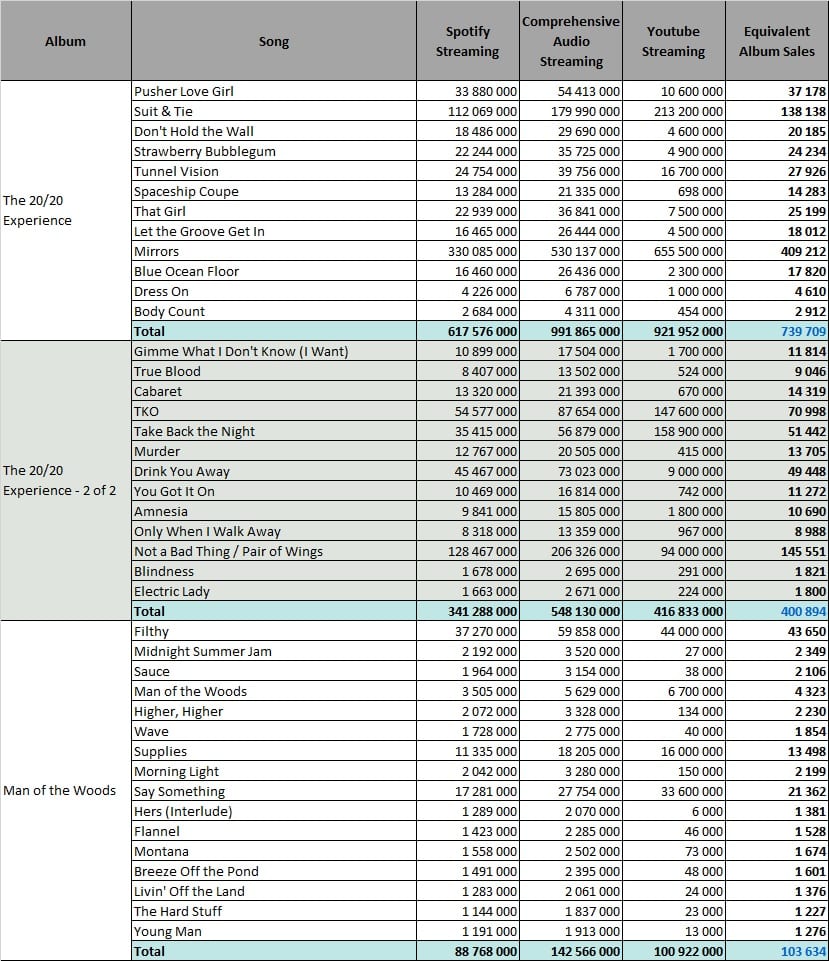 Suit & Tie hasn’t maintained its initial popularity. The track has 112 million streams on Spotify, which is great, but we need to point out that it is already topped by the likes Rock Your Body. This is a striking result given streaming had started to gain ground by 2013 and Suit & Tie was able to accumulate streams from day 1 of release. Elsewhere Mirrors continues to be a powerful song with 330 million streams on Spotify and twice as many on YouTube. Most songs from the album are on 15-20 million too, greatly helping the overall total of The 20/20 Experience, which stands at 740,000 equivalent album sales.

Once again Volume 2 fails to reproduce the numbers of its immediate predecessor. Not A Bad Thing is still strong at 128 million streams on Spotify and the track list overall is solid at 401,000 units.

Man of the Woods is too recent to come to a conclusion, at least it adds already more than 100,000 sales to its personal counts.

This website uses cookies to improve your experience while you navigate through the website. Out of these cookies, the cookies that are categorized as necessary are stored on your browser as they are as essential for the working of basic functionalities of the website. We also use third-party cookies that help us analyze and understand how you use this website. These cookies will be stored in your browser only with your consent. You also have the option to opt-out of these cookies. But opting out of some of these cookies may have an effect on your browsing experience.
Necessary Always Enabled
Necessary cookies are absolutely essential for the website to function properly. This category only includes cookies that ensures basic functionalities and security features of the website. These cookies do not store any personal information.
SAVE & ACCEPT
wpDiscuz
48
0
Would love your thoughts, please comment.x
()
x
| Reply