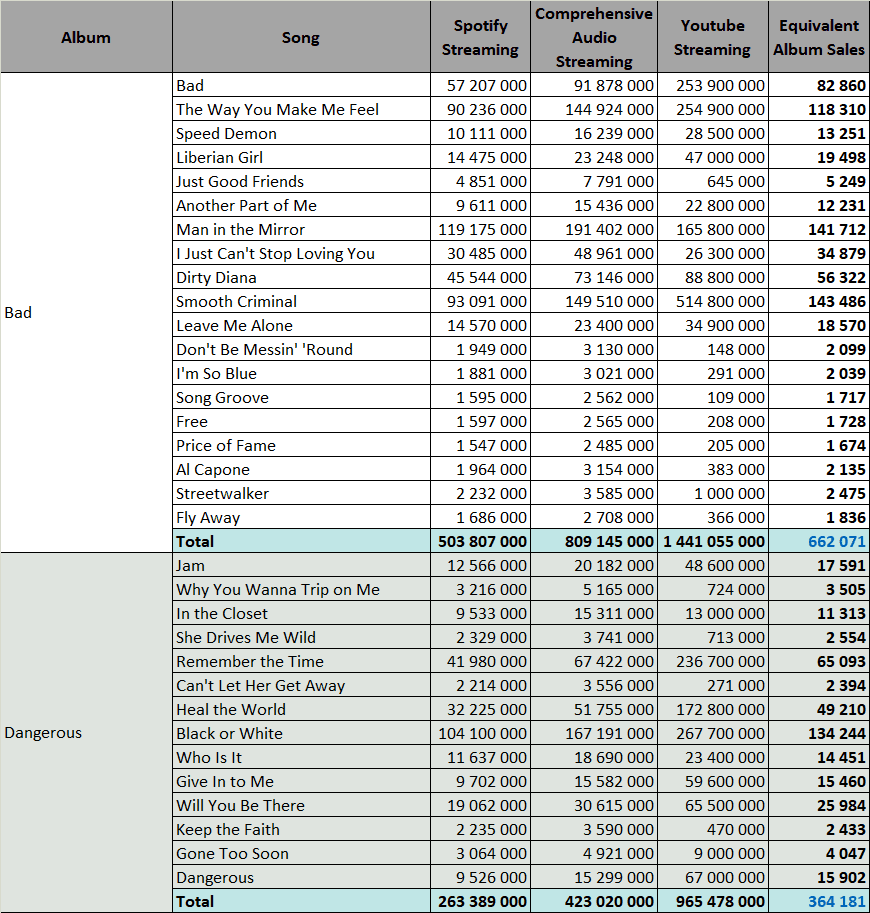 Combining Spotify and YouTube streams, as many as 4 songs from Bad crack the 300 million mark. The remaining 5 songs issued as singles back in the day are in the 14-45 million range on Spotify. Speed Demon also continues the string of unbelievably strong album tracks at more than 10 million. The 8 outtakes added to the 25th anniversary edition all have over 1,5 million streams too. Those all-around golden numbers amount for 662,000 equivalent album sales.

Dangerous too is pretty amazing. The total of 364,000 equivalent album sales is lower, but still stunning nonetheless. The comparison with history-making albums like Thriller and Bad is kind of unfair. If we compare it to U2‘s Achtung Baby, a very solid Rock smash released at the same time, Dangerous crushes it by almost 2 to 1. Black Or White tops 100 million on Spotify and 8 more songs have a rounded 10 million or more. Among them is the title track, which is one more non-single that is up to massive numbers.

Maybe you’re wondering why Queen are missing from these lists, after all they are arguably the true streaming masters among 20th century artists. But the reason is that their top SEVEN tracks on Spotify are from seven different albums! Amazing actually. Their #8 track “We are the Champions” is the 2nd biggest track on “News of the World” with 480.7M, and rank #9 in the “Biggest 2nd track race”. And what about other 20th century artists with huge Spotify tracks, like Oasis, Mariah Carey, Journey, Toto, A-ha, the Eagles, Earth Wind & Fire and the Police? Well, while hardly one-hit-wonders,… Read more »

Thanks! I love these lists!

Will you do an update soon? This article was over 3 years ago.

His sales in Japan seem relatively weak for his overall Asai sales ..any reason?

It’s not that they’re weak there, he’s among the very top international sellers in Japan. It’s just that his sales in places like China, India, Taiwan and South Korea were utter massive and unmatched by any other western act at his time. You could argue he was the first western artist to ever break into the mainstream in some of these countries.

How did Madonna issue albums in a much more favourable era?

She had her peak with him and they both released albums in late 90s and early 2000s, Madonna released more.

The Stones too released albums in the 90s / early 00s, it isn’t that much relevant when we look at the sales environment they had. Invincible is far and away Jackson’s weakest album. What makes a difference is the period when an artist enjoys his hey-days. He peaked (obviously) in 1983 and the barycenter of his success through the years isn’t that much later. Madonna’s one is 6-8 years later, and the market in early 90s was already way bigger than in mid-80s.

Didn’t most of Madonna albums flop in the 90s? She just had one successful album with Ray of Light!

Immaculate Collection is a compilation, it doesn’t count.

None of her albums except ROL sold 10 million in 90s.