Streaming Part 3 – On Fire no more 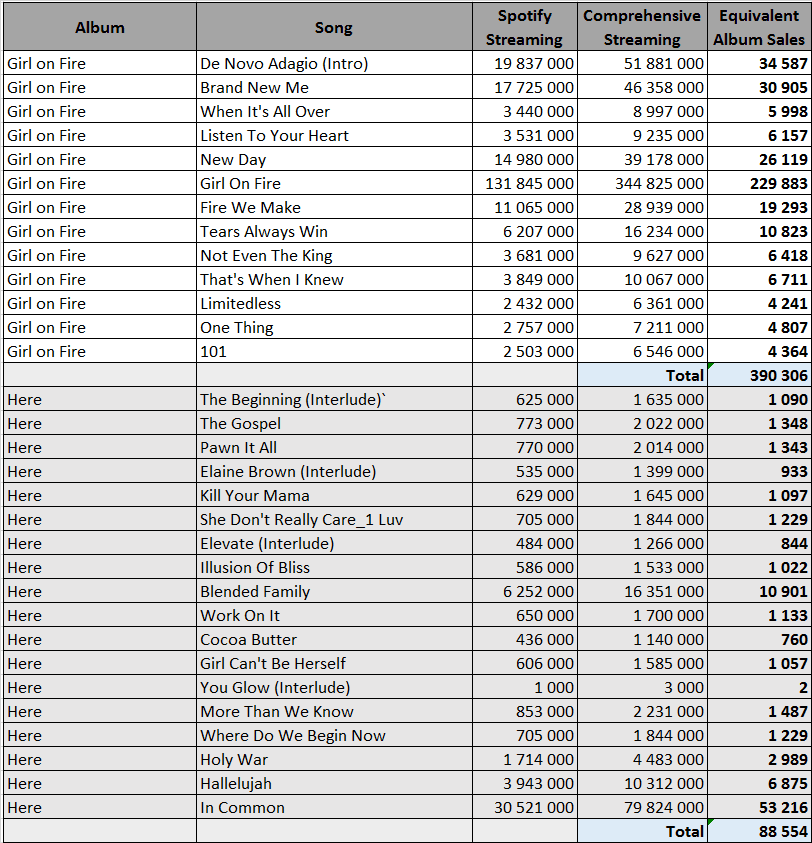 With Girl On Fire we go back to Alicia Keys early albums pattern but translated into the streaming era where figures are higher overall. Thus, the 70+ million plays hit is Girl On Fire at 132 million, remaining singles are up to an average of more than 15 million rather than 10 million while album tracks are on 2 to 4 million. Overall, this equals to 390,000 units.

This implies a very, very atypical situation. Previously, we noted how each of the artist first five albums saw their album sales decrease in comparison to its predecessors. In streaming, this is very exactly the opposite with each album outperforming its previous album. While Girl On Fire case may be explained by the boom of streaming, this can’t be the root cause for the other albums trend. How to explain such a bizarre situation then? What happened is that her albums are rated as more and more consistent by her fans and black music lovers, which is why streams are favorable to latter records. In the other side, R&B music genre went from being the hottest thing on Earth to be a truly unfashioned style, decreasing a lot the interest of the general public which impacted negatively album sales as years went by.

Obviously, to maintain that increasing streak the last album Here still has plenty of work to do as it remains so far on a fairly weak 89,000 equivalent album units, although that’s a really nice addition to the album poor shipments.