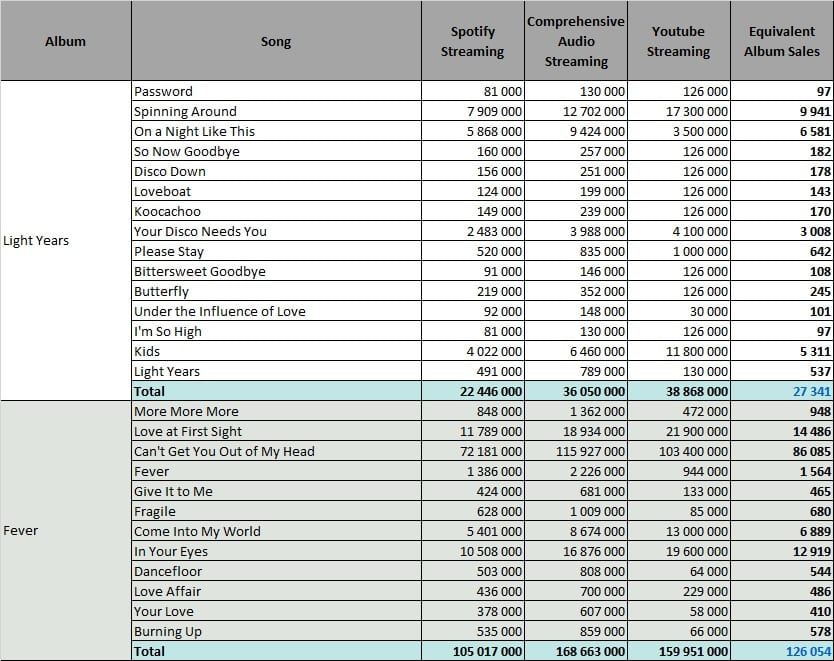 While in comparison to the remaining of Minogue tracks, this looks impressive, the figure is rather disappointing. It is below other 2001 songs like It’s Been A While by Staind, U Remind Me by Usher, Family Affair by Mary J Blige, Hero by Enrique Iglesias and many more which were nowhere near as big as Minogue‘s smash in first place.

While in comparison to the remaining of Minogue tracks, this looks impressive, the figure is rather disappointing. It is below other 2001 songs like It’s Been A While by Staind, U Remind Me by Usher, Family Affair by Mary J Blige, Hero by Enrique Iglesias and many more which were nowhere near as big as Minogue‘s smash in first place. 3 years later, Can’t Get You Out Of My Head has 224.5M stream on spotify while It’s Been A While has 181.6M stream, U Remind Me has 233.3M, Family Affair has 195.5M and Hero has 219.6M. Aside from Usher, Kylie already… Read more »

If u think that is funny and her achievement are not impressive. Imagine how all the struggling artists out there feels like. Kylie’s achievement is already extraodinary and millions of singers out there would do anything just to achieve 10% of what she has achieve.

And Kylie’s “Can’t Get You Out Of My Head” is bigger than any Lady Gaga song!

The article was updated 1 year ago only and album sales are correct. Do not believe everything you read. A figure of 5 million for Light Years for example is completely delusional. There is no need to throw out figures based on nothing, claiming she is on her way to reach 100 million when she did a bit more than half of that only!

There is no proof whatsoever that she has sold “90 million”. 40 million is a more accurate figure.

Hey MJD! You made a really great job with Kylie. Although it hurts to admit it – as a Kylie fan – this proves how she definitely is a UK/Oz based artist with occasional success outside of those borders… Anyway, I have a very precise question regarding Can’t Get You Out Of My Head’s French sales. They used to be estimated at around 900k, with a few years ago I remember reading an article on Charts In France sayig that this figure had been massively overestimated and that it was actually on less than 600,000 copies… I find it hard… Read more »

Amazing work you did there a few months ago.

Would be fantastic if you could update that part with your data, now that the campaign draws to a close.

Debate is rife on forums – only proper figures can get a proper picture.

I have to ask you something!! Where did you find the Fever sales in Bazil?! I never read nothing about it, it wasn’t even certified Gold by ABPD/PMB here, and we have only 2k with codes (after 2003).

To simply define an artist based on sales and your feeble attempt to undermine her popularity with an article on a online publication is simply sad. Should you look at the cultural impact Kylie Minogue has generated over a thirty year timespan as well as consistantly garnishing multiple top tens in multiple countries theoughout the globe speaks for itself. Not to mention doing so without the massive revenue market that is America. No one needs your analysis to validate her popularity. I understand you are seaching for a way to justify your opinion, but your opinion is just that, an… Read more »

Hi Scorn1031! Surely what’s bad is thinking that a fans board of people backing each other in believing their fave artist have been shaking the world of music and fashion for 30 years is an accurate place of information. You say she has “consistantly garnishing multiple top tens”, that’s false, in most markets she got 2-top 10 eras, with a huge 13 years hole in-between, and that’s it. You affirm, backed by nothing, that she is immensely popular. That is an opinion. Records sales are no opinion, they are facts, no matter if they are of your liking or not.… Read more »

I think you are both right in your own way. I have followed Kylie from the very beginning and although I stopped buying her releases (or anyone else’s for this matter) a long time ago, I am a supporter of hers.. There’s no doubt she made a difference with Kylie & Fever releases that we can categorized as an impact to an extent but apart from that, I don’t think she qualifies for one of the biggest selling artists…. Yes she’s had a few top 10s singles and yes she’s had a few #1 albums (uk & Oz) but that’s… Read more »

Absolutely agree. Kylie Minogue’s fans are the most delusional ones, to be honest.

I agree with others that your dislike of Kylie is very clear…I am from Asia and Kylie is a very welcome western pop star. She is treated as the national treasure of Australia. She became international without US market, which is really impressive. We all know that Kylie is not comparable with Madonna on selling numbers because nobody could. People put their names together because they have very similar fan base ( Dancepop, Gay icon, in a friendly way) Kylie is probably the only mainstream artist only focusing on dancepop throughout her career. Your complete ignorance of her tour makes… Read more »

I suppose 3 clarifications are needed:
1) the article is from April
2) the 100k figure you state is pure units shipments estimates, the 288k involves streaming points
3) Mediatraffic are massively inaccurate anyway, they can’t be stated as facts

This website uses cookies to improve your experience while you navigate through the website. Out of these cookies, the cookies that are categorized as necessary are stored on your browser as they are as essential for the working of basic functionalities of the website. We also use third-party cookies that help us analyze and understand how you use this website. These cookies will be stored in your browser only with your consent. You also have the option to opt-out of these cookies. But opting out of some of these cookies may have an effect on your browsing experience.
Necessary Always Enabled
Necessary cookies are absolutely essential for the website to function properly. This category only includes cookies that ensures basic functionalities and security features of the website. These cookies do not store any personal information.
SAVE & ACCEPT
wpDiscuz
82
0
Would love your thoughts, please comment.x
()
x
| Reply