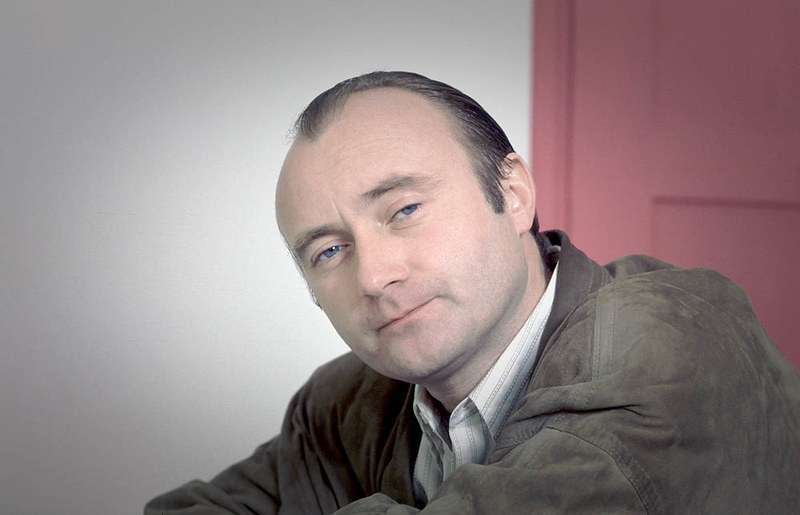 From his debut on Genesis‘ line-up as a drummer in 1970 to the release of the smash hit Another Day In Paradise in 1989, Phil Collins‘ popularity increased steadily year after year up to the very top. A tremendous hit maker during the 80s, the artist has been more discreet lately.

Even before joining Genesis, Collins was already busy building his artistic career, even playing a few drums on George Harrison‘s legendary album All Things Must Pass. At first, it wasn’t easy for him nor for his band. They first made the UK album chart in 1972 after 3 years and 4 albums. The following year, they reached the Top 10 with a live set and #3 a couple of month later with Selling England by the Pound. In 1975, the departure of their singer Peter Gabriel concluded on Collins taking the mic. Then, they waited until 1980 to top the British sales ranking thanks to Duke.

The name of Collins was already quite popular at that point. It was going to grew even more in 1981 after with the release of his debut solo album Face Value. The LP contained the cult song In The Air Tonight. The singer and his band weren’t household names in the US yet, which explains why the song peaked only at #19 there. Its lasting appeal opened the door to playlists of the main radios for the singer though who amassed 7 solo #1 American hits by the end of the 80s.

Unlike Michael Jackson, Madonna or even U2, Collins is never mentioned among the top selling acts of all-time. Was his fame short-lived? Was his success axed around a few markets only? Or is he wrongly forgotten?

As usual, I’ll be using the Commensurate Sales to Popularity Concept in order to relevantly gauge his results. This concept will not only bring you sales information for all Collins‘ albums, physical and download singles, as well as audio and video streaming, but it will also determine their true popularity. If you are not yet familiar with the CSPC method, the next page explains it with a short video. I fully recommend watching the video before getting into the sales figures. Of course, if you are a regular visitor feel free to skip the video and get into the figures.

So, do I gather correctly that the top 3 persons to sell the most albums in Europe are:

Or have any of the Queen guys maybe sneaked more than 10 million album sales in Europe?

The problem with this kind of lists is that you end up saying things like “Ringo Starr sold more albums than Elvis”… If you’re wondering who are the most successful individual musicians in Europe, that would be between MJ and Phil Collins, both having sold around 100m albums as solo artists + lead singer of their respective bands.