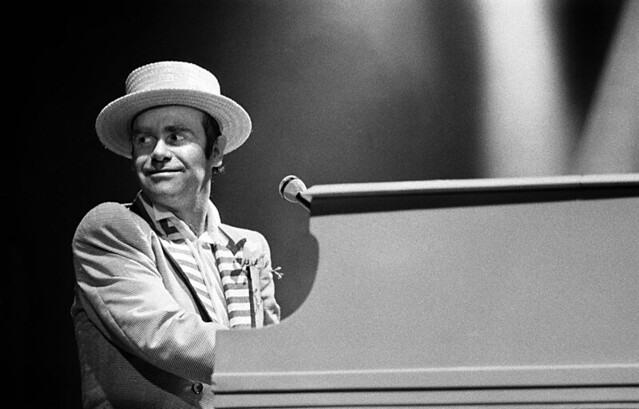 Some 88,63 million studio album sales across 35 releases. The average may not seem impressive for a singer as popular as John, but there are several reasons to explain this situation.

During the first half of the 70s he was undoubtedly the biggest pop star in English-speaking countries. This preceded the real explosion of the LP format though. At the time even the Platinum award was still not invented as 500,000 units was already a tremendous achievement. Most mega-sellers from the years 1970-1975, led by the likes Dark Side of the Moon (Pink Floyd) and IV (Led Zeppelin) achieved the largest part of their sales thanks to catalog appeal. The point is that except Goodbye Yellow Brick Road, which is still widely available and frequently promoted, the remaining studio albums by John are ignored. Both by his labels and by his fans. Original marketing campaigns of those albums were also axed around only two single releases at most, with new LPs coming out every semester. The lack of success in key markets like Japan, Germany and France didn’t help either. All these elements combined limited the potential of early 70s albums, the biggest ones.

In fact, as early as in 1974 John had a monster selling compilation, Greatest Hits. This very early choice of releasing compilations destroyed any kind of chance for his studio albums to amass relevant amounts in the long run to make up for the limited market initially available.

Then his flamboyant years came to an end. From A Single Man at last he started to enjoy some success in continental Europe and in Latin America, but it was also his first album to fail to reach the Top 10 altogether in the US. Victim of Love was a disaster everywhere and the next 3 albums remained fairly low sellers by his standards.

Too Low for Zero operated a strong comeback with 3,35 million sales in part thanks to the hit I’m Still Standing. Albums such as Breaking Hearts and Ice On Fire all had their own hits with Sad Songs and Nikita respectively pushing them to more than 2 million units each. Leather Jackets shot down this nice string with chaotic results.

John then managed to revive his success thanks to the smash Sacrifice from the album Sleeping with the Past. This opened the door to an extraordinary decade for the singer. During the 90s his studio albums mostly failed to register big hits, but he did achieve several hits like Can’t You Feel The Love Tonight from the Lion King Soundtrack and the Candle In The Wind tribute to Lady Diana, a song initially released on the album Goodbye Yellow Brick Road. The market was so big in the 90s that all the old glories regarded as cool were registering 3-5 million album sales per record on their name alone. This happened to the Rolling Stones, to Bruce Springsteen, to Eric Clapton, …, to Elton John. For this reason the song Sacrifice was really essential to the success of the latter part of John‘s career.

Late 90s Soundtracks and the rough failure of Peachtree Road killed this positive momentum. For the last 15 years the singer hasn’t managed to recover. Now nearly 71, we can hardly blame him for not being a fresh pop star anymore. His successful period already outlasted most artists with 30 years of great showings. This was also visible inside the Singles charts that we are going to examine right now.