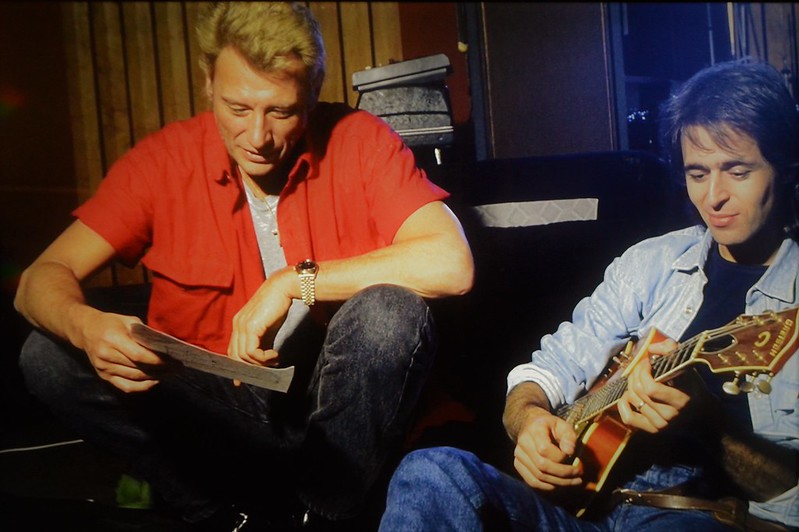 Barely Top 20 among his highest selling physical singles, Je Te Promets is the leading force in his catalog currently. The track has moved 140,000 digital units since the introduction of iTunes in France way back in 2005. Please keep in mind that this figure excludes sales following Johnny‘s passing that saw this track shoot to #1 for two weeks.

The case of L’Envie is even more extreme. Tied at #84 among the singer’s top selling hits upon release, it is the second strongest catalog seller of his catalog in the digital area. Incredibly enough for a singer who released 52 12-inch albums plus 11 10-inch LPs, his two most remembered songs are both included on his 1986 effort Gang. This shows one more time the golden touch of Jean-Jacques Goldman, the author of those two hits. As if it wasn’t enough, both Laura and J’oublierai Ton Nom, at #13 and #15 in this ranking, belong to the same studio album.

At #3 comes Quelque Chose De Tennessee from Gang‘s predecessor, Rock’n’Roll Attitude. The immense popularity from songs of those two albums explains why their 2CD package Paroles d’Hommes sold upwards of 400,000 units in 1995. The song is only his 45th top selling physical single, showing how much the market had already moved onto albums at the time. One more song by Michel Berger, Diego Libre Dans Sa Tête, features inside the Top 5 although failing to be a part of Johnny‘s personal Top 100 physical singles. This single, written for France Gall in 1981, was covered and released after a rendition from Johnny live in 1990. It was added as an extra track of Rock’n’roll Attitude in the Paroles d’Hommes set which thus included 4 out of the 5 best tunes of the singer.

The remaining songs inside the Top 10 like Requiem pour un fou, Que Je T’Aime, Marie and Allumer Le Feu were big both upon release as physical singles and as catalog download tracks. There is at least one song from each decade going from the 60s to the 00s inside the Top 9 which perfectly summarizes how massive the rocker remained all along his career.

Elsewhere songs like J’ai un problème, Oh ! Ma jolie Sarah and Noël interdit, are all among his Top 10 physical sellers, although they haven’t retained much popularity up to now.

In total, the singer sold over 1,4 million units, a tremendous tally considering that the French market never got into legal downloads.