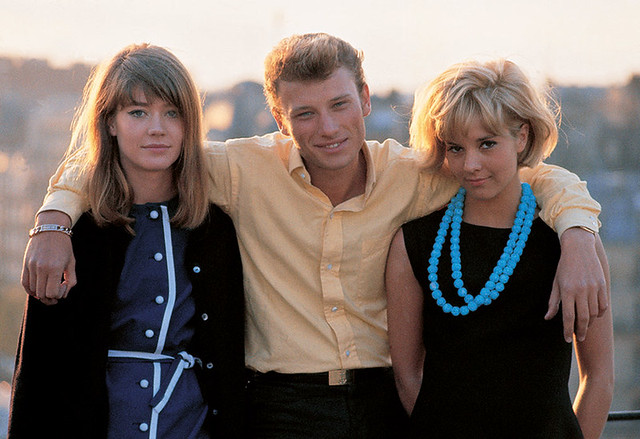 The French Elvis. That is how Johnny Hallyday has been described by media sources all over the World after his passing on December 5. This comparison falls short of highlighting how hugely popular the French singer has been in his native country as not even Elvis Presley‘s catalog isas rich as his.

The American legend passed away in 1977 after exploding in 1955. Johnny, as he is known in France, came to fame in 1960 and followed the footsteps of his idol during their years in common. He extensively milked American standards with translated covers of songs like Elvis‘ Love Me Tender and Heartbreak Hotel, the Animals‘ House of the Rising Sun, Creedence Clearwater Revival‘s Fortunate Son, Little Richard‘s Tutti Frutti, Chuck Berry‘s Sweet Little Sixteen and Johnny B. Goode, Jimi Hendrix‘ Hey Joe, Lynyrd Skynyrd‘s Sweet Home Alabama, Ben E. King‘s Stand By Me and many more. In total, that’s 233 international hits that he covered, most of them from his debut to the mid-70s. As France always relied on local acts his versions were often far more successful than the original songs.

From 1976 he started to register massive hits from French lyricists and during the 80s the likes of Michel Berger and Jean-Jacques Goldman wrote him entire albums that were home to several songs that soon became stand-out classics. In 1999 and 2002, 4 decades into his career, he released two consecutive albums that still belong to the all-time Top 40 highest selling albums ever in France. Since then, his albums have gone Diamond more often than not. At the end of the day, in terms of popularity, his discography is closer in France to the ones of Elvis, Billy Joel and Eminem in the US put together , rather than the one of Elvis alone.

How does this unreal career translate into numbers when we consider that the French music industry has been historically about 8 times lower than the US one? His Sang Pour Sang is his biggest seller, but how do all his albums stand when factoring in singles as well as sales of compilations generated?

A lot as been said about his record sales since his passing. We will track sales of all his records to discover the truth is. In order to do it, post-mortem sales aren’t considered. This will also enable us to show the impact of his death with a future update.

As usual, I’ll be using the Commensurate Sales to Popularity Concept in order to relevantly gauge his results. This concept will not only bring you sales information for all Johnny‘s albums, physical and download singles, as well as audio and video streaming, but it will also determine their true popularity. If you are not yet familiar with the CSPC method, the next page explains it with a short video. I fully recommend watching the video before getting into the sales figures. Of course, if you are a regular visitor feel free to skip the video and get into the figures.