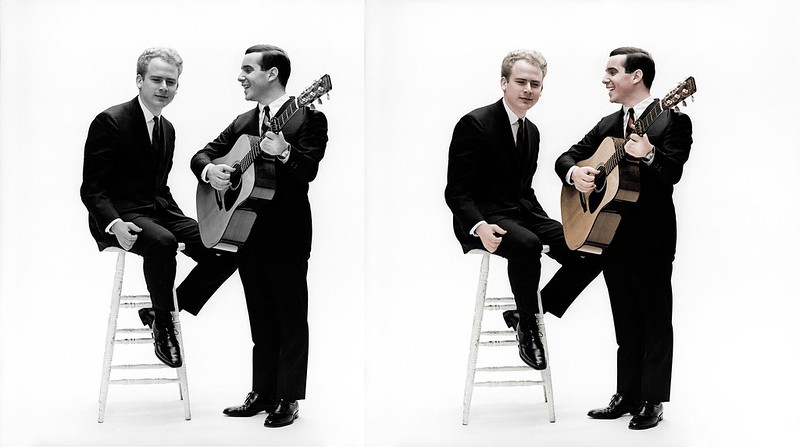 The duo made of Paul Simon and Art Garfunkel, who was first promoted as Tom & Jerry struggled during several years before exploding to the general public. It did so in two steps, first thanks to a re-issue of The Sound of Silence which cross over the main audience, hitting #1 in the US. Second, thanks to the movie The Graduate and its #1 Soundtrack made of songs from them.

This progressive raise in fame resulted in one of the weirdest discographies you will ever find. The first album Wednesday Morning, 3 A.M flopped at first, so when its song The Sound of Silence became big a pair of years later, a new album contained the same single although in a new version, Sounds Of Silence, was issued to benefit from this hype. Then The Graduate as a Soundtrack included Sounds Of Silence too but also Mrs Robinson, the big hit which was supporting their 4th album Bookends at the same time.

Since they all included the same singles, their records cannibalized each other from day 1. It makes their success much harder to read. Luckily, thanks to our approach we are able to re-assign the success of all records into their original creators, providing at last a clear view of the duo’s popularity.

As usual, I’ll be using the Commensurate Sales to Popularity Concept in order to relevantly gauge their results. This concept will not only bring you sales information for all Simon & Garfunkel‘s albums, physical and download singles, as well as audio and video streaming, but it will also determine their true popularity. If you are not yet familiar with the CSPC method, the next page explains it with a short video. I fully recommend watching the video before getting into the sales figures. Of course, if you are a regular visitor feel free to skip the video and get into the figures.

Don’t really understand how the new design works. There are no pages to scroll through, only the first page.

No worries, it is all being set up, just a little bit of patience 🙂

I am a huge fan of Art Garfunkel. He has a God given voice.

Not bad result for them

Do Tom Jones, please. His birthday is coming.

But yeah, ” the sound of silence ” is sometimes even brought up/discussed on english classes/subject

Great job ! But one thing : maybe it’s an omission but I don’t find a mention of the Ms. Robinson live version of The Concert In Central Park on the singles sales list.
In France (and maybe elsewhere I don’t know…), it was a huge success, and probably a big sale too, during the spring of 1982 ! Cheers.