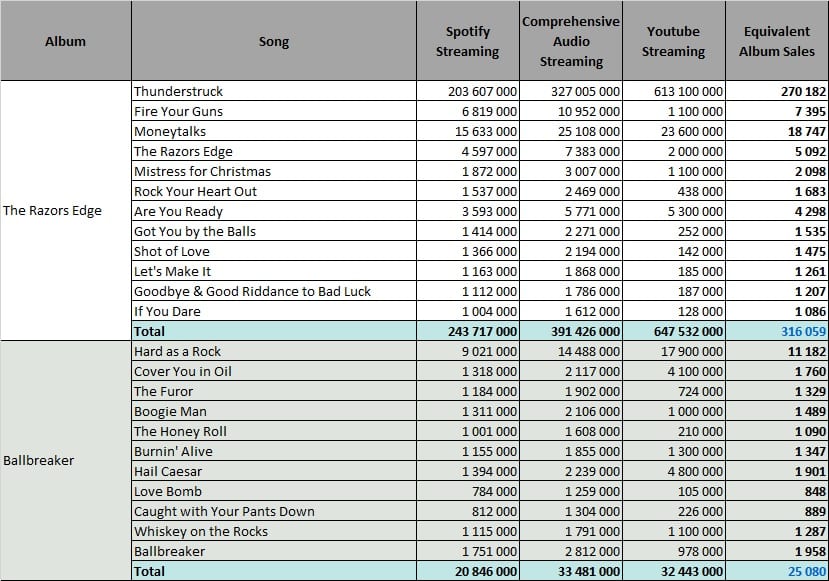 Like the 80’s, AC/DC started the 90’s on a commercial high. You could say the Who Made Who and Heatseeker singles paved the way, but more likely it was the help of renowned producer Bruce Fairbairn that did the trick. The Razors Edge was arguably the most polished AC/DC record to date. Lead single Thunderstruck, and the catchy 2nd single Moneytalks, both became worldwide hits, the latter being their first and only Top 30 hit in the US. While Moneytalks has a strong 16 million Spotify streams, Thunderstruck became a true monster, right up there with the iconic Highway to Hell and Back in Black in the 200 million league! And on Youtube it is easily AC/DC‘s biggest track ever with 613 million views. All the album tracks are also above 1 million on Spotify for the first time since the Back in Black album. This adds up to a massive 316,000 EAS – the second highest figure in their catalog

Ballbreaker was the only other studio album released in the 90’s. Although it failed to match the success of The Razors Edge, it did reach the Top 5 in most countries including #4 in the US. And streaming wise it fares a lot better than their late 80’s albums, reaching 25,000 EAS. Hard As A Rock is a solid 9 million on Spotify, while most of the other tracks top the 1 million mark too.

This website uses cookies to improve your experience while you navigate through the website. Out of these cookies, the cookies that are categorized as necessary are stored on your browser as they are as essential for the working of basic functionalities of the website. We also use third-party cookies that help us analyze and understand how you use this website. These cookies will be stored in your browser only with your consent. You also have the option to opt-out of these cookies. But opting out of some of these cookies may have an effect on your browsing experience.
Necessary Always Enabled
Necessary cookies are absolutely essential for the website to function properly. This category only includes cookies that ensures basic functionalities and security features of the website. These cookies do not store any personal information.
SAVE & ACCEPT
wpDiscuz
109
0
Would love your thoughts, please comment.x
()
x
| Reply