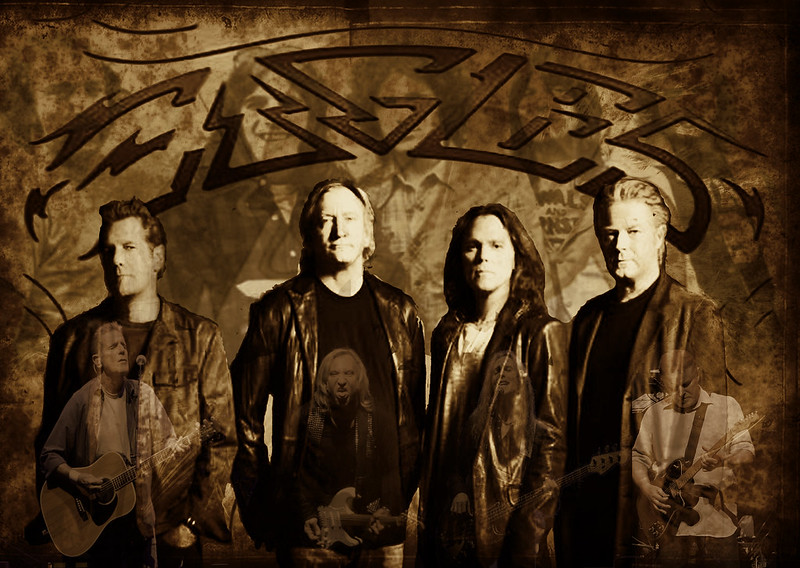 40 years ago the success of the Eagles‘ fifth album titled Hotel California was so massive that the industry was looking for new words to define it. Along with Stevie Wonder‘s Songs In The Key of Life, Fleetwood Mac‘s Rumours and Frampton Comes Alive!, it sold over6 million units during its first year. While the RIAA had introduced the Platinum Award some months earlier, these industry gorillas opened the door for multi-Platinum discs that would arrive in 1984 for the first time.

By then the Eagles had already split although they only released one more studio album, 1979’s The Long Run, since their global breakthrough. Their former members Joe Walsh, Don Henley and Glenn Frey were successfully going solo. This brief period of success shouldn’t be enough to make this band one of the all-time greats. The Eagles are inevitable in every Classic Rock bands list though. The song Hotel California is an absolute classic, but in various countries there is nothing else from them that is popular. Just one song doesn’t transform an average act into a giant rock band, the Animals and Derek & the Dominos can confirm that. What’s the truth then? How does Hotel California stand against the biggest albums of all-time? How many units has Their Greatest Hits 1971-75 sold, the album that was long the front runner in terms of Platinum awards in the US?

As usual, I’ll be using the Commensurate Sales to Popularity Concept in order to relevantly gauge their results. This concept will not only bring you sales information for all Eagles‘ albums, physical and download singles, as well as audio and video streaming, but it will also determine their true popularity. If you are not yet familiar with the CSPC method, the next page explains it with a short video. I fully recommend watching the video before getting into the sales figures. Of course, if you are a regular visitor feel free to skip the video and get into the figures.

Do you guys need more help with Chartmasters? I would love to contribute if you need!

Their US albums sales are just mindblowing. Are they the best selling album acts ever there?

I talk about RECORDS

Babs! Come on, look at the hard figures not the bullshite.

Omg, are you Barbra hater? Barbra sold at least physical 95 million albums and 30 million singles, and her still produce no1 record now, she may be the biggest selling female in us forever. It’s interesting to read Barbra’s Popularity Analysis. I also want to know the record sales figure MJD will give

The Eagles may sold more album, but must less singles than Barbra, Barbra sold more record i think

Their success in the US is indeed unreal and using pro-rata to the catalog surely only the Beatles, Led Zeppelin and Garth Brooks can challenge them. In overall units though the Beatles and Elvis are much ahead.

MJD how big are the rolling stones in the usa? How many albums have they sold there? And what about Led zeppelin? I read in a forum that the stones sold 76 million albums while led zeppelin sold 105 million. Are these sales accurate?.

Thank so much in advance you always do an amazing job with your analysis and make it really interesting to read( sorry for my english :$)

I wonder of you use a particular way to evaluate the japanese and asian figures?

Hi Grendizer! The easiest way is to estimate sales in the US / UK / France / Italy during the “visible” (on charts) periods in Japan and look at the percentage they each represent to their to date tally on those countries. Then we cross-check YouTube views to see if the same songs are still remembered in Japan and apply the needed factors. Of course it is needed to adjust depending on local compilations that could cannibilize sales earlier / later than in other countries. In the case of HC, it sold roughly 40% of its to date tally during… Read more »

Omg. I never thought the song “Hotel California” was that big. Awesomeness.

I’ve always considered them to be the most overrated band of all time…
1 HUGE hit from 40 years ago… and i couldn’t find another song that i liked. I really tried.
In any case, impressive numbers! Now i’m curious if Aerosmith will steal the title of “the best selling American band”.

I’ve never thought of them as being overrated, as they have never received the same kind of press and critical acclaim as the The Beatles, Led Zeppelin, Pink Floyd, The Stones etc and none of their albums are ever thought of as truly classic and certainly never perform well in “all time lists”. In fact, if anything, I’d say they are underrated, as given their huge sales, they are just not praised or written about in the same reverential way as a lot of other acts, with far less sales.

The band of America, with The Rolling Stone. Eagles’s coms’s sales in US is incredible. Not new studio album during 80s 90s even before middle of 00s, isnt new com including major singles of older will effect tue olders’ sales? It’s an unbelievble phon… as Elvis, they’s coms sold more than studios

I wish Barbra ‘s analysis is in schedule

In some ways yes but The Beatles clearly out do them in the US and by a very, very small margin, Led Zeppelin do also.

70+ million! VOW! I knew Hotel California was big, but not this BIG!
Surprising since the gigantic GH71-75 is not included in that 70 mio figure. But GH2, latter compilations and Hell Freezes Over is very much fueled by the HC album, and especially that one song. 51.84m EAS – holy crap!!!

I spent years listening to the Eagles…………one of my favorites………..I bet if you add in Don Henley solo career (he was involved in EVERY Eagles record), He’d be flirting with Celine Dion for that 190 million mark. (11.5 million in U.S. alone)

Can’t wait to see if Rod Stewarts HUUUGEEE catalogue and international appeal can beat it.
(I was thinking somewhere around 160 million for Rod)

I agree with above poster………..Elton and Elvis are gonna crush it

I’m not sure about Rod. I’d love him to be up there and I’m sure he will be but just not right up there. His studios are not great sellers or lasters and his GH’s aint The Eagles, Queen or ABBA.

I belive Phil Collins would have a bigger CSPC-numbers than Rod Stewart actually.

I believe both Phil and Rod won’t cross the 130m.

Just for the fun we can try to predict-guess CSPC numbers for some artists…..:-)

Frank sold over 100 million album, plus contritions from singles…must be more.
Barbra sold over 150 m albums, 30 m singles US alone, may be 170 m?!
Elvis’s coms and singles may put the total higher than 330m

Dire Straits sold nearly 110 million albums, i guess they are in the 120 range

#2 album ever. Their US popularity really is immense.

Not an act I was thinking would be up next but a nice one to see. I’ve never really liked their music, just doesn’t get me but I’ve always been very impressed with their popularity and sales, especially in the US and with so few studio releases, although as seen, their compilation releases play a very big part. Wasn’t thinking they’d crack the Top 10, obviously they wont stay there once acts like Elvis & Elton are done but they wont be very far away. “At 171 million equivalent album sales, the Eagles are the most successful act ever with… Read more »