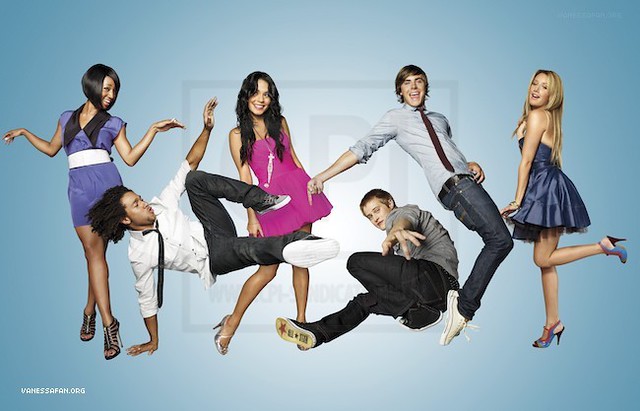 Every record is worth buying if it puts a smile on the face of your children. Teen pop music and the Disney industry are two prime examples of this reality. When the power of both are merged together, it may result into Britney Spears, Justin Timberlake, Christina Aguilera, Hannah Montana / Miley Cyrus or… the High School Musical cast. Exactly 10 years ago this week, the second volume of this trilogy debuted at #1 in the US with an impressive 615,000 copies sold. Let’s bring back some memories studying this highly popular franchise!

There is no doubt that Zac Efron & friends were huge. The TV series was watched by millions, the DVDs sold past 25 million units Worldwide and the third movie, Senior Year, was issued in theaters all over the globe banking in more than $274 million.

What about their music though? The single Breaking Free spent one week inside the Top 10 in both the US and the UK, at #4 and #9 respectively. What Time Is It? had a brief peak at #6 in the US also, but that’s it. No other single from the High School Musical franchise charted higher than #20 in both countries. They had no continuity whatsoever and no song from those movies managed relevant airplay. So, while the series was popular inside the entertainment industry, was it really big inside the music industry? How have their three albums performed, as well as their singles? Are their songs still streamed to this day or was it all about a temporary hype?

As usual, I’ll be using the Commensurate Sales to Popularity Concept in order to relevantly gauge their results. This concept will not only bring you sales information for all High School Musical albums, physical and download singles, as well as audio and video streaming, but it will also determine their true popularity. If you are not yet familiar with the CSPC method, the next page explains it with a short video. I fully recommend watching the video before getting into the sales figures. Of course, if you are a regular visitor feel free to skip the video and get into the figures.