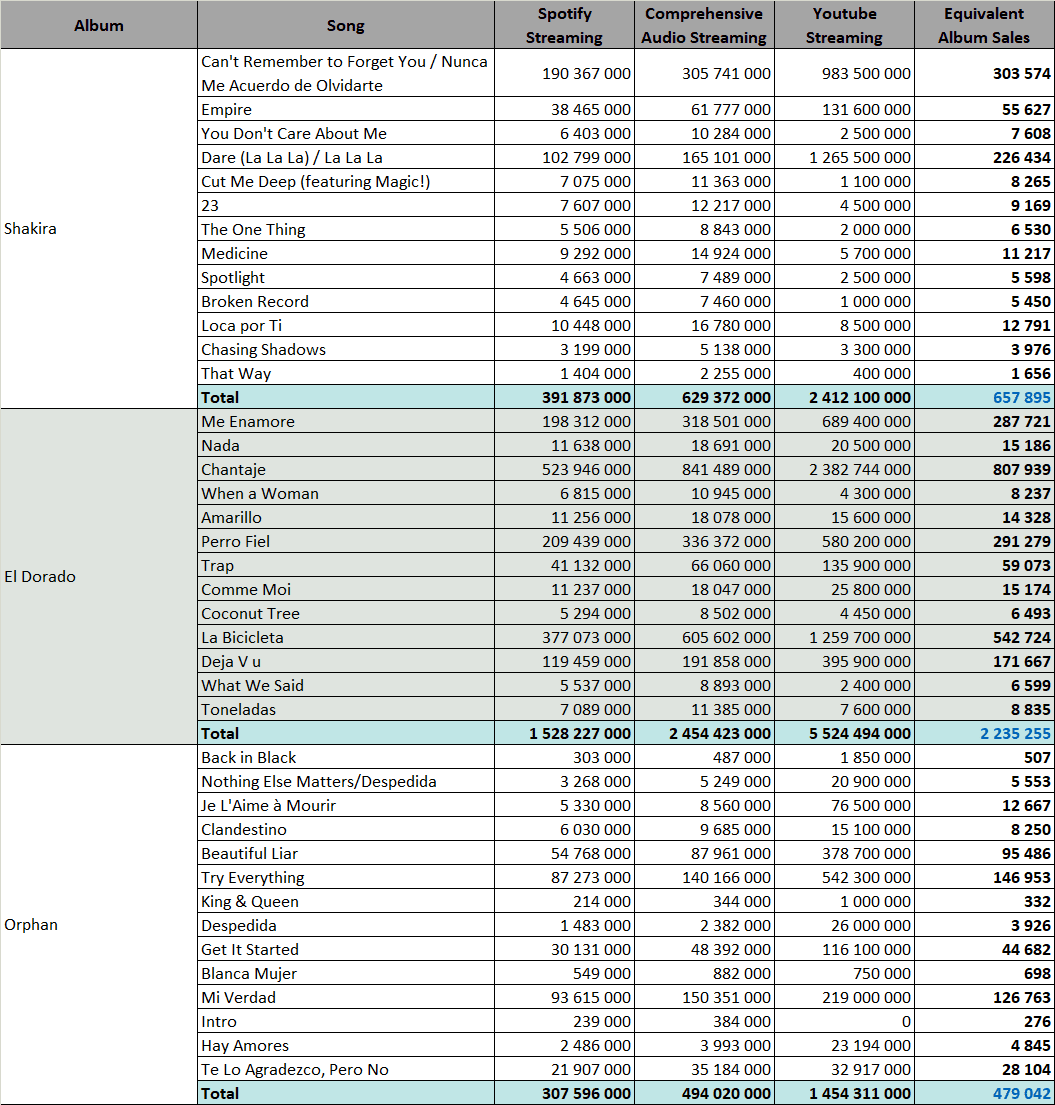 Shakira. was a disappointment upon release with album sales way down from its predecessors. While it doesn’t reverse this trend with streams, it does perform better in this avenue. The duet with Rihanna Can’t Remember to Forget You is closing in 200 million Spotify streams while Dare (La La La) is growing year after year, standing at more than 100 million to date. Both songs are also close / over 1 billion on YouTube. That’s good enough for a solid 658,000 EAS.

El Dorado‘s sales were largely mocked. Seen as a major flop, its songs kept gaining heavy airplay as well as streams in Latin markets for nearly two years. Chantaje is at 524 million on Spotify and over 2,38 billion on YouTube. La Bicicleta is also huge on both while Perro Fiel, Me Enamoré and Déjà Vu are also very solid. The total of the album is up to over 1,5 billion on Spotify and a stunning 5,5 billion on YouTube. It stands on more than 2,2 million EAS from streams alone.

The Orphan section is quite empty. It still contains Beyoncé‘s duet Beautiful Liar as well as all new songs that came out very recently. It is good enough for nearly half a million EAS, a figure that could be reached thanks to the newly released Clandestino.

Are you able to update her sales? I want to see her super bowl’s performance impact on her sales!

Well, she should come visit us more often! 🙂

Accordinf to you, “Try Everything” had 1.08 million digital sales until 2018 but in 2019 the RIAA updated it to 2x Platinum and BPI gave it Silver (Total – 2,2 Million) taking into account that it was launched around the world the number grows even more, could you explain this to me MJD?

This is all fake because: •Billboard stated that Shakira had sold 10 million album units in Latin America *before 2001*, that Donde Estan Los Ladrones was close to 900k in the US in 2005, and that Laundry Service has sold 13 million copies worldwide until 2005. So the sales of Pies Descalzos and Donde Estan Los Ladrones are not real. https://books.google.it/books?id=4RQEAAAAMBAJ&pg=PA23&lpg=PA23&dq=billboard+shakira+13+million+laundry+service&source=bl&ots=IDKTkEOoY3&sig=ACfU3U1MvvoDV_p6DL95ZxNa3XRDnt8OSg&hl=en&sa=X&ved=2ahUKEwi3s8yuyMzqAhXIfZoKHeYRDooQ6AEwCXoECAQQAQ •Shakira herself in 2012 reported that Laundry Service has sold 20 million copies worldwide, so even the laundry service data is fake. https://m.facebook.com/5027904559/posts/10150830049184560/ •in 2007 BMI reported that Pies Descalzos had sold 5 million copies, and Oral Fixation 8… Read more »

The “10 million copies in Latin America only” is completely nonsense, in most Latin countries an artist get a platinum certification for sales between 3,000 and 150,000 and Laundry Service was not selling at millions in the biggest Latin markets as Brazil (it sold 150,000 there less than Pies Descalzos and Donde están…) and Mexico (it sold less than 500,000 there) where those millions came from?. Billboard can’t say nothing about sales, except those that came from United Stated, thanks to Nielsen Soundscan. The thing is for years there’s no way to know about artists sales, fans and record companies… Read more »

This data is the fakest thing I’ve ever read. She has sold more than that, as official sources have confirmed throughout the years. Do it again with more research, thanks.

Hi MJD, I really like your review, but are you sure the singles released before “Whenever” have no sales? Here are some examples.

Hi Debers! There are 3 distincts cases in the links you list. Firstly, the most recent singles, these ones do have a few sales. Back when we compiled Shakira’s article we weren’t using Discogs quite as much (and Discogs itself wasn’t quite as comprehensive) so for recent singles we often ignored them from physical singles’ sheets since more often than not they had no physical release. As for older singles, the ones showing ‘Remix’ on titles are most likely or promo or unofficial releases, there are thousands on Discogs that aren’t tagged as such so far. The ones that would… Read more »

MJD, I’ve heard several times over the years that Shakira has been a consistent seller in Near Eastern and Middle Eastern countries. I wouldn’t be surprised if she was popular in India because I know they’re fond of Latin music. What do we know of her actual sales in those areas ? I’m sorry if you already answered that question, I haven’t found any answer in the comments.

You can check the studies of the MENA and India by Al to check her streaming numbers there, but I don’t know if there’s any information on the site about her actual sales.

Her sales in India are very strong with Laundry Service at 160k and a career total likely past 300k. This makes her one of the very best selling international acts there. I’ve read some huge download claims for her as well

“Ciega Sordomuda” entered the Top 10 of Spain, remained on the chart for 2 weeks. Are you sure I can’t sell anything there?

See this is problamatic. Example: In Colombia Pies Descalzos was certified Diamond Prism for 1M copies by ANSINCOL and that was in 1996. Source: https://books.google.co.za/books?id=sQkEAAAAMBAJ&pg=PA64&dq=shakira+billboard+million&redir_esc=y#v=onepage&q=shakira%20billboard%20million&f=false

This award keeps getting shared day in and day out for many, many years, but sadly most people don’t understand what it stands for. ANSINCOL certify sales of Colombian albums, which is something very different from sales in Colombia. They are closer to GAON than the RIAA. Pies Descalzos got this award for 1 million sales globally, not locally.

Not many people, but billboard wouldn’t report on it if they didn’t know what it stood for, right?

Well, if you read back the Colombian section of the page you link, they clearly give indicators of performance of the Colombian industry in Latin America, and they point out how some of their artists are “viable exporters”, and that it’s what ASINCOL is tracking. They aren’t looking at the local market.

Hey, Tere are some things wrong, for example, Shakira. was certified diamond in Colombia for selling 200k