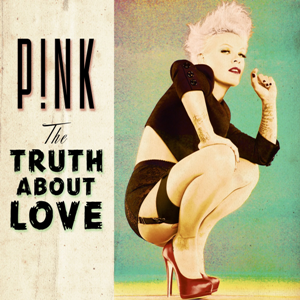 Historically, artists often struggled to sell well with a new album once they started to release compilation albums. Just like the general public feels they already got enough, that the artist hey-days are necessarily gone since a best of has been released.

It wasn’t that much of a threat for P!nk. The deeper she has been on her career, the more solid she seemed to be. Blow Me (One Last Kiss) was the leading single of her new album, coming out in July 2012. It debuted at #90 and dropped to #124 the following week. One could have expect the worst for this new era but it was only the time to gain traction on radio. A couple of months later, the track was peaking at a much more respectable #22.

The album was released on a busy week facing a new album by Mika, who’s incredibly popular in France, a reissue of legendary Bad album by Michael Jackson plus two new albums by famous local acts Jenifer and Saez. The four proper new albums entered at 1-4, with P!nk being last at #4. She sold nearly 18,000 on a close race since Mika sold 26,000 units at the top albums at 2-3 selling 21,000 and 18,000 copies.

By Christmas week, the album was down to #56 which was still good considering the September release. It sold 76,500 units for the year. The second single Try was getting bigger and bigger every week by the end of the year, ultimately peaking at #15 on an extensive run of 56 weeks.

While Try gave The Truth About Love a Top 60 placing for its first 26 weeks, it was Just Give Me A Reason that gave the album its best support. A big #4 hit that totaled 69 weeks inside the Top 200, this Nate Ruess duet shot the album from #59 to #12 within’ a few weeks. The #52 hit True Love, one more duet this time with Lily Allen, retained the album a few more months inside the Top 40.