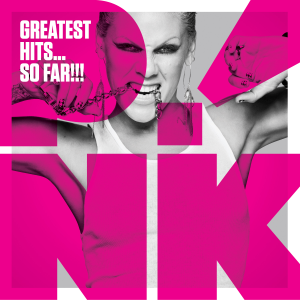 This first compilation includes 18 songs on its main edition, 16 hits from her five studio albums plus two new songs. Those new songs are Raise Your Glass and Fuckin’ Perfect, two upcoming worldwide hits.

By 2010 artist best of albums were virtually dead. Greatest Hits… So Far by P!nk may very well be the last such package that can be considered big. In France it wasn’t so huge, although it did debut at #2 in the Compilation chart, in the comprehensive ranking it started at #14. The package sold 35,000 copies during 2010. On their side, both new singles peaked respectively at #37 and #24. Raise Your Glass peaked at #18 a few weeks before the introduction of digital sales inside the official Single chart in the Download ranking.

Those singles maintained the best of for most of the year in the Album Chart. In fact, from January 29 2011, not only digital sales got included in all rankings, artist compilations got allowed to chart in the main ranking as well. Greatest Hits… So Far replicated its 2010 35,000 sales in 2011 and kept selling well ever since.