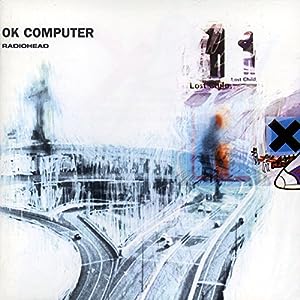 The Bends was already critically acclaimed, but it is OK Computer than turned the good rock band Radiohead into the greatest band on Earth in the eyes of specialized Medias.

The first three singles became each utterly iconic. Paranoid Android came out as the leading hit, peaking at #3 in UK while the album was becoming their first chart topper on its June 1997 debut. In France too the album did well, debuting at #20 and thus out-peaking their previous set. It peaked anew at #11 on week two.

Sticking inside the Top 30 during the quarter of Paranoid Android promotion, the album increased 28-20-14-9-5-3 when second single Karma Police went on radio rotation. By October, some four months after release OK Computer had shipped 200,000 units already. It closed the year 1997 as the 28th best seller with 275,000 copies sold. January 1998 third single No Surprises kept the album alive a bit more. All three songs remain among the 90s favorites for an entire generation. The album was on 330,000 copies by the end of 1998.

That year, a new near-album EP was released with Airbag / How Am I Driving? which was limited to the North American market but was ultimately issued in France in 2008. In the meantime, OK Computer success boosted the band catalog sales in great fashion everywhere. Sales of their catalog up to the end of 1998 are estimated as detailed below: