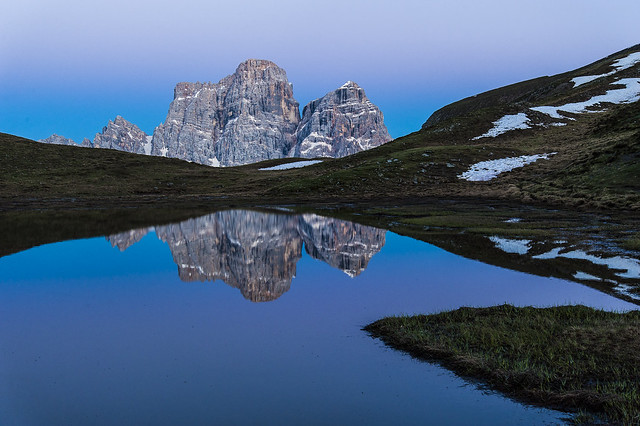 How good does your peak taste?

Below table displays the average number of sales achieved by the peak album of artists depending on their gender and their debut decade.

We can notice the overwhelming dominance of bands from the 60s to the 80s. On average, their albums peaked higher than peaks of anyone else at over 35 million. It’s due to their catalog appeal that opens the door to massive totals for classic albums. The average of males debuting during the 70s is inflated by Michael Jackson. Without him, the figure drops to 30,7 million. Male acts have been roughly consistent throughout the years.

To the surprise of nobody, females took over the lead since the 90s thanks to the Big 5 plus a few comets like Shania Twain. The ‘Rock is dead’ claim appears to be partially true as bands who debuted from the 90s to date have been peaking much lower than their fathers. As for groups, boys bands definitely had a golden period during the 90s. Their average for our current decade consists exclusively on One Direction, which make them look strong still. Truth is, apart from this later group, these kind of acts hasn’t been doing well lately.

You peaked, now what? 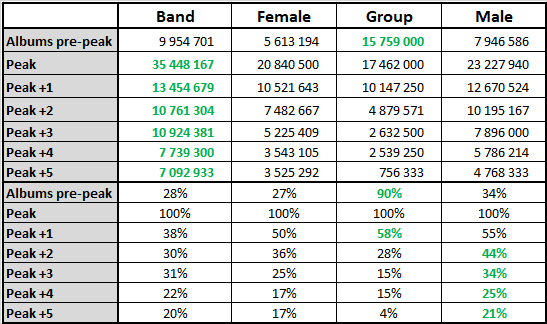 Various bands amassed immense sales during their career, so it’s no surprise to see them lead with albums following their peak in absolute terms. Statistics in percentage are enlightening though. We can see that groups are impressively healthy during 3 albums then freefall. It’s perfectly consistent with their careers, marketed to death over a short period of time to milk them while they are hot among teenagers. Then they disappear, or if lucky, some move into a solo career.

Bands have the weakest immediate post-peak album. It’s natural since their main classic album sells so well that the rest of their catalog can’t compete. In the long run though, they hold truly well. Males seem to remain popular after their peak for a long time. While it’s mostly true, it’s once again Michael Jackson who fuels albums peak +1/2/3 thanks to his Bad to HIStory albums.

Females are once again in-between groups and bands/males. They enjoy a hotter, more intense period around their peak. Then, in the mid to long run, they drop more. Basically, when groups last 3-4 years, divas tend to last 6 to 8 years. Males can remain strong for up to 15 years a la Eminem while bands are able to score hit albums for 20 years or more.

How can you exploit these numbers for your favorite artist? For example, Christina Aguilera is returning soon with a new album, Liberation. If we ignore Burlesque, that will be her 5th studio album since her peak, her self-titled debut. Female singers remain fairly stable between their albums Peak+4 and Peak+5. It’s also relatively true for bands and males. Thus, Liberation expected sales are just under those of Lotus.

Let’s try to be positive. Among the 39 Peak+5 albums we tracked, 13 posted increases over their predecessor, so Liberation has a 33% chance to top Lotus. Can we expect 2 million plus? Since her last album did just under a million, that would require a +100% increase in sales. No female artist ever did that with their 5th album post-peak. The biggest jump ever recorded by such an album is +55% by Britney Spears‘ Circus.

In this paragraph, I assumed that Liberation is the 5th album following her peak. How much are its chances to become itself her new peak? Well, virtually 0. Aguilera debuted 19 years ago. Among all artists we ever studied, the only singer to peak that deep into her career is Cher. She didn’t had that big of a peak previously and the market was perfect to enable a smash. The environment is nowhere near as favorable nowadays for Aguilera. Her peak is tough to beat in itself, that would require a Sheeranesque success. It will simply not happen.