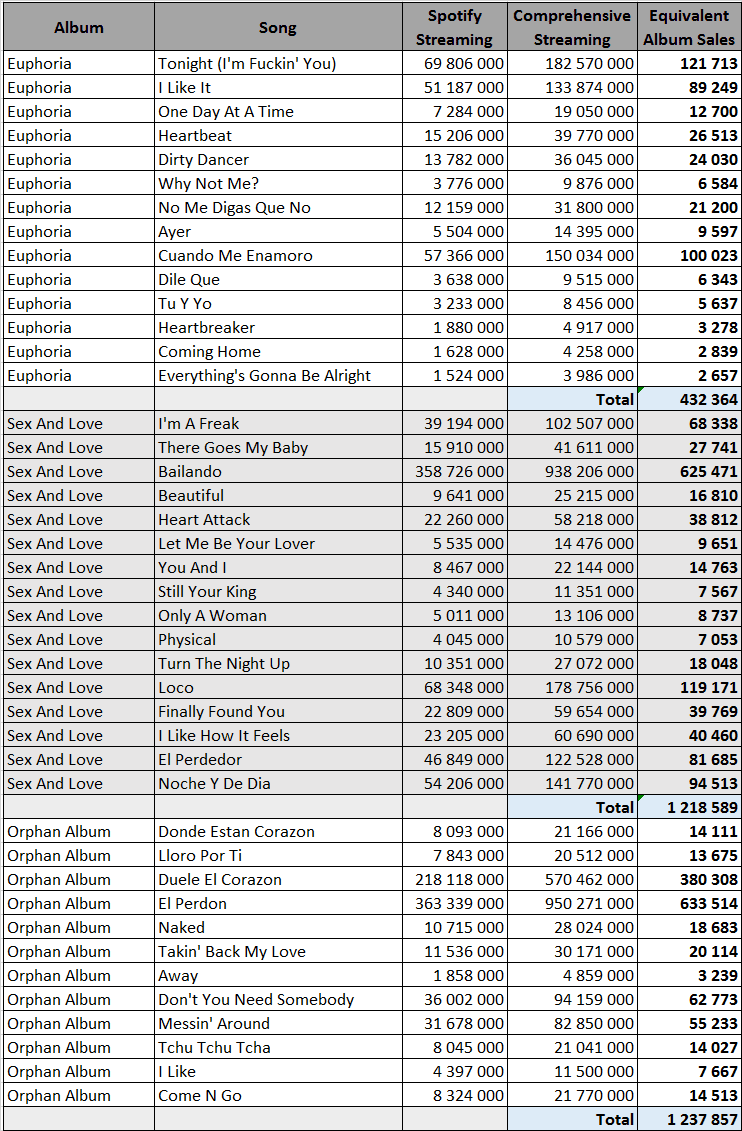 We conclude the fourth part. We enter the streaming era wih Euphoria, definitely a successful project, at over 430,000 equivalent albums sales. I Like It, Heartbeat, Dirty Dancer, No Me Digas Que No and especially Cuando Me Enamoro were all strong hit singles, all of them popular collaborations.

Sex And Love, fully released after the boom of streaming, was absolutely huge through this new way of consuming music, correlative, of course, of his declining pure albums sales. Iglesias switched from one format to the other in a very successful way. The proof? His last album to date managed a tremendous 1,22 million equivalent albums sold, not far from what it did as a pure album, both with physical and digital sold.

And last but not least, his Orphan Album track add up a further 1,238,000 albums sold, with Duele El Corazón and El Perdon being the strongest ones with a huge 580 million combined.

In terms of album sales equivalent, Bailando added to Duele El Corazón and El Perdon are on more than 1,6 million units. It is important to notice this is roughly half what a trio of huge English hits would do. This 2 to 1 ratio, in comparison to the 5 to 1 ratio verified in the physical era should be hugely highlighted. In fact, it shows how the Music Industry map will be redistributed. Spanish acts will get way bigger thanks to big countries in terms of inhabitants that had historically relatively low music markets. The key point isn’t on Spanish acts only, indeed, Chinese artists, Indian ones and even African artists can expect much higher returns to their success in the future as streaming is poised to penetrate those areas way more than physical sales ever did.