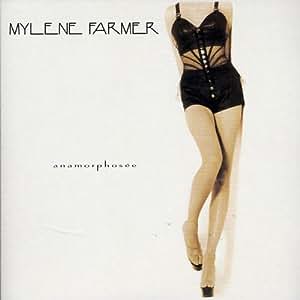 After very busy years from 1986 to 1992, Mylène Farmer avoided over exposure by taking a three years break. Her comeback with Anamorphosée in late October 1995 was once again big news.

Coming from back-to-back million selling albums, the bar of expectations was raised very high. Giving her popularity, the #1 position of lead single XXL isn’t even surprising. This result was a travesty yet. In fact, one more consequence of a truly dedicated fanbase is also to get a lot of free sales upon release, which is exactly what shot XXL to the top on its first week. The song was nowhere near as popular as previous leading single Désenchantée as while that one dominated charts for 9 weeks, this new song was way down to #34 after that time frame.

The lack of appeal from this song added to the hyper-mega-giga success of Celine Dion album D’Eux that year implied Anamorphosée had to settle at #2 position when first released, a situation that seemed impossible a few months earlier. What wasn’t a travesty was the incredible ability of Mylène Farmer to drop cult hits. While the album was freefalling, down to #11 after a mere three weeks inside the top tier, second single L’Instant X quickly rescued it. More than a small support, it increased the album position from #24 to #2. If you wonder who blocked her again four months after its debut, well, that was again Celine Dion with her D’Eux record.

Album down to #17 a few weeks later, new single – California -, new Top 10 hit – #7 -, new climb of the album – up to #5. The script was getting reproduced again and again. Fourth single Comme J’Ai Mal at #11 was the first regular single to miss the Top 10 since A Quoi Je Sers in 1989. It also failed to boost the album. Never doubt Mylène Farmer skills yet as fifth single Rêver became big. The #7 peak isn’t that impressive but it shot the album from outside of the Top 50 to #1, ultimately making the top. Ironically, it dislodged no other than Celine Dion who was leading the chart with Live A Paris, the live continuation of D’Eux.

Dropping out for good from the Top 50 in April 1997, the album still hadn’t cross the million mark due to the lack of high sales during key periods like Christmas. By the end of that year it had a healthy total of 910,000 units sold though.

Just like its two predecessors, the album collapsed from the ranking only when replaced by a Live / Remix record. This time it was Live A Bercy, a May 1997 release that went #3 upon release and #2 the following week. With 18 weeks Top 10 and 28 weeks Top 20 its longevity was incredible for a live release. The point to understand is that Mylène Farmer was up to three utterly successful albums plus a fourth one with hit singles and still no compilation released. Containing as many as 9 top 10 singles, this live album  was a real greatest hits package. This explains how that album sold 625,000 units by the end of 1998, an unbelievable 70% of its related studio album. Among myths created around the artist sales, one of the most repeated is that Live A Bercy is the best selling live album ever in France. If the success of this release is undeniable, that claim is a real nonsense as various live records sold over 1 million units in France like Simon & Garfunkel Concert In Central Park, AC/DC Live, Nirvana Unplugged or Phil Collins Serious Hits Live. Within’ the French language live sets, Celine Dion has two ahead of Live A Bercy, while the biggest one is En Public by Jean-Jacques Goldman at 990,000 units.

None of her previous albums re-entered charts during this era although they sold some copies obviously.

Top 5 Most Streamed Tracks on Spotify