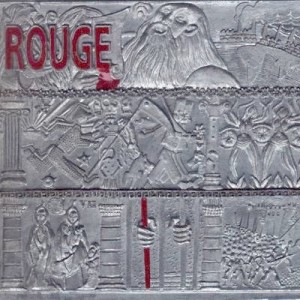 Now up to his 7th album overall since 1981 Démodé, it seemed the artist could do nothing wrong. Rouge album wasn’t going to change this trend. Singles of it were arguably the weakest of his career with the leading song Rouge peaking at #18 and the remaining two at #32 and #33. The fact is that in terms of market albums were massively taking over singles at that point. From mid-80s to 1993 album sales exploded from 50-ish million per year to 110-ish million. In the same time frame, singles went down from 60 million sales a year to 10 million. This situation led majors to forget about singles for various notable artists, including Jean-Jacques Goldman.

It is quite visible by the fact that although singles peaked way lower, the album sold just as well. Easily debuting at #1 where it stood for seven weeks, just like the trio previous two LPs this record stole the throne during the full month of December proving once again the unmatchable strength of the singer. Selling well all over 1994 year, the album was certified 3xPlatinum at 900,000 units by October, ultimately hitting Diamond in August 1995.

This last award wasn’t date specific, it just happened that Sony did no audit from April 19 to August 17 of that year. The album crossed the million mark just after the former date, concluding 1995 on 1,05 million.

Du New Morning Au Zenith, one more live record, came out in May 1995. The big news is that it failed to hit the top spot, getting blocked for four weeks at #2. For the first time in a decade one Jean-Jacques Goldman album failed to hit #1. The irony is that he was blocked by no other than Celine Dion with her D’Eux album, wrote by Goldman himself. This chart trivia hasn’t prevent the album from selling more than 400,000 units for the year.

In the meantime, the artist catalog was still selling very well, including a 3CD pack with Minoritaire, Positif and Non Homologué that sold over 100,000 units. As a first greatest hits was going to come out in 1996, it looks like the perfect timing to summarize the singer sales up to the end of 1995.

No track from the album among the artist Top 20.