Yes, Eminem, Coldplay and Linkin Park haven’t only been dominating this Top 100, they also steal all three spots of the Top 3! It’s the latter band that has the final word with almost 170 million streams for In The End. This tally doesn’t even include the 6,7 million streams from Izzo / In The End mashup with Jay-Z from the Collision Course album.

It may come as a real surprise but In The End was the last single of Hybrid Theory album. This set was already sitting inside the Top 40 of most countries charts for several months all over 2001 thanks to its hits One Step Closer, Crawling and Papercut, selling a few million of copies. In The End which came out in the fourth quarter of 2001 boosted the album in an other dimension. Climbing inside the Top 5 of all countries, Hybrid Theory never stopped selling since, eventually cracking the 20 million mark with years of strong catalog sales.

Most hits are only big enough to sell singles. Some of them will be stronger and sell an album. All three songs The Real Slim Shady, Yellow and In The End are among cult songs, those hits so widely beloved that they can serve as incredible foundations for entire careers. Just like for the previous two, below is a review of Hybrid Theory entries inside this list. 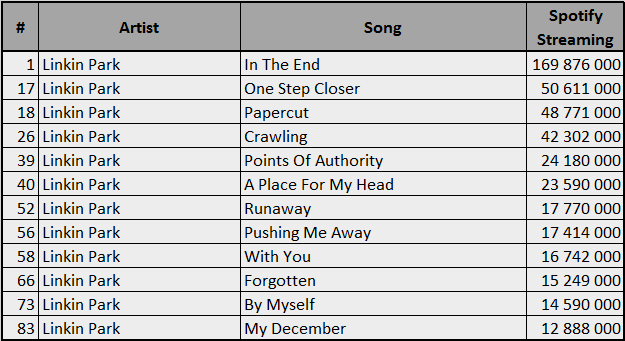 Wait, it’s not over! One last page remains…