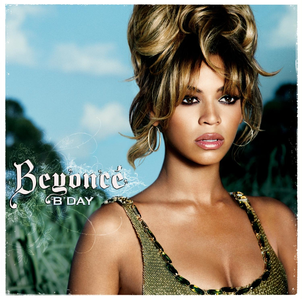 B’Day era was pretty mixed for Beyonce in France. Anticipation wasn’t that big as last Destiny’s Child album disappointed and Dangerously In Love was already three years old, an eternity for an artist with an audience consisting mostly of teenagers in France.

First singles of this era weren’t that well received either with Check On It peaking at #32 and Déjà Vu at #23. As a result, B’Day opened at #12 only, an improvement from previous album but rather low considering the final sales of that album. After barely six weeks, the album had left the Top 100.

Changing the way of an album in France is rather difficult. Even a big hit can push the album up again but still in a restricted dimension. That’s exactly what happened with B’Day era it wasn’t saved even if singles performed better and better, with third one Irreplaceable peaking at #10 and fourth single, duet with Shakira Beautiful Liar, was a big #1 hit. Beyonce previously peaked at #8 with both her solo singles and her hits with the Destiny’s Child, so one may expect wonders from a #1 smash. The problem is that Beautiful Liar was regarded in France much more as a Shakira single as the Colombian already registered several big cross over hits unlike Beyonce. Thus, even B’Day reissue containing this new hit only went to #29 and dropped fast.