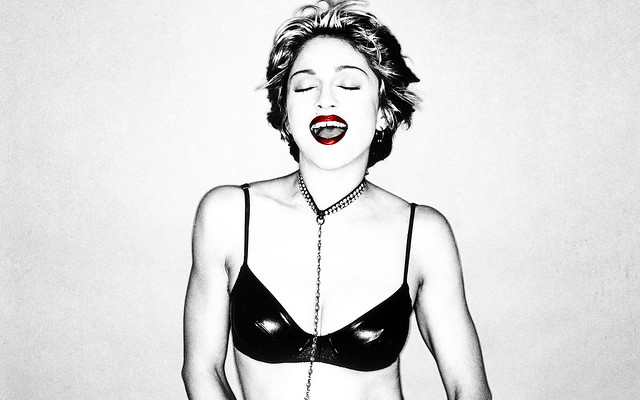 Madonna is a global icon. She is known to be a superstar all around the world. Even if you did well everywhere, there will always be markets where you do better than others. What’s the heatmap of her success? It’s time to draw its picture!

We know her sales in many countries, but the question mark is still there for various of them from Asia, Latin America and Eastern Europe. She is arguably not so strong in the former continent and in South Africa. Is this claim backed by proper facts or is it one more false myth? We will use the distribution of her views from every relevant market to complete the global map of her fame.

In order to identify on which countries Madonna performed well, the way to go is to look at the remaining monster sellers. Thus, we collected market by market YouTube statistics of all Top 4 CSPC artists so far. They are the Beatles, Michael Jackson, Elvis Presley and Queen. Then, Adele was also added to get an artist reflective of the current market dynamics.

Once we defined the strength of each market for scale artists, we calculate the average of markets. To continue with our example, our scale artists register 1,67% of their global streams in Japan. Madonna‘s count there stands at 1,24%, it means the relevance of this market is only 74% (1,24%/1,67%) as high for her as for the others. 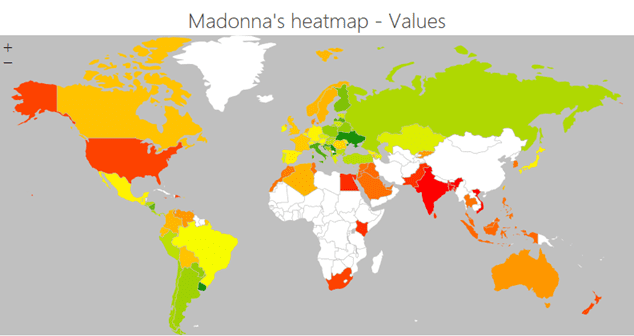 The greenest a country is, the best Madonna performed in comparison to the scale artists. On yellow ones, she still does better than the average. Countries in orange represent mixed performances, the most red they get, the most she underperforms. Countries in white fail to appear among her personal Top 100 markets on YouTube.

We aren’t done still. An artist can record a huge chunk of his views in a few countries only, say in the US. His comparative shares in remaining countries would then underperform massively reference values. This issue is known for years in the world of statisticians. A very efficient way to avoid these outliers consists in comparing rankings instead of raw values. As a result, instead of saying that Madonna outperforms the scale by 2,44 to 1 in Uruguay, we will say that Uruguay is the country of rank 1, the one where she performs the best relatively speaking. 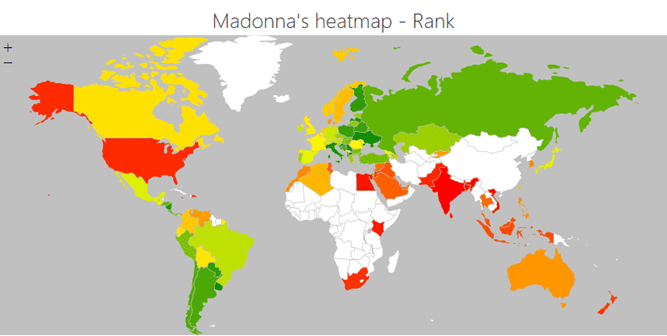 The greenest a country is, the highest it is among Madonna‘s top markets and so on until red markets.

Interestingly, the values map puts at the very top areas where Madonna‘s sales remain relatively unknown like Latin America and Eastern Europe. Uruguay is quite simply her best market while Macedonia, Ukraine, Serbia and Croatia complete her Top 5.

Among her Top 14 countries the only relevant market is Italy which comes at 6. The love story between Madonna and the country of her origins is known for long. The fact that her popularity is high in so many low-key markets reflects that acts pre-dating her like Elvis Presley had their success more weighted towards historical markets like the US, Canada, Australia and the UK.

Big countries in a music industry perspective where she outperforms the scale by at least 20% include Argentina, Brazil, Germany, Hong Kong, Mexico, Japan and Spain. These proves her global reach with positive indicators from diverse areas. The presence of Japan and Hong Kong also highlights that the artist’s fame there is understated. It is so because of the super-sized success of some of her direct competitors like Mariah Carey and Celine Dion which makes her great sales there look so-so.

In countries from Southeast Asia she isn’t that strong. We need to nuance this comment too yet. Her statistics indicate markets like the Philippines, South Korea, Indonesia and Malaysia are about 30% weaker for her than for other artists. By itself, 70% of scale artists isn’t that bad, plus the fact she did well everywhere necessarily downgrades figures from her good but not very good markets.

The best example of that is the US where Madonna obviously sold massive numbers. Still, relatively speaking the country is #92 among her Top 100, the true trademark of a global star. She is 49% lower there than scale artists, so she actually does better on YouTube right now all over Asia than in the US. South Africa is at the same level than the US, while among her very worst markets, well below everywhere else, feature Pakistan, India, Bangladesh and Sri Lanka.

I’m shocked she has so many green countries and few red countries. She basically dominated Europe and Latin America. Even tho i understand that her controversial figure wasn’t accepted in most red countries. I thought she was one of the most successful acts in Australia tho.

I don’t think her latest album and tour will change much, if anything, with regards to this particular global heatmap analysis. She has obviously added sales to her total with the new album and the tour will also no doubt help her streams and sales but let’s be honest, her catalogue sales and streams are not spectacular and her sales and streams from Madame X are not exactly setting the world on fire either. I’m not so sure interesting results would come from a redo of the analysis. I’m pretty sure her overall total will not have risen much from… Read more »

I’m almost absolutely sure Madonna will be outside top-10 in ten years. But it’s highly likely she’ll be on top in 50 years. Musicologists and academy fancy her works the most.

How she gonna be outside? Aren’t these maps based in every artist’s whole career? You can’t erase her career success and i don’t think anyone would outsell her in just 10 years.

You’re right that Madonna’s catalogue will never perform as well as Queen or MJ’s but on spotify and youtube, it’s doing better and better in comparison to her competitors like Whitney, Mariah and Celine. She’s doing good, just not on Queen or MJ’s level.

Cause she’s still alive. Her streaming numbers will be bigger in the future

no they wont, Madonna is a spent force and old hag now.

Yes they will. Cause death always increases sales and streams of an artist. Michael Jackson was the most hated man on the planet and still when he died he sold a lot. And Madonna is way bigger than him so she will get a lot of streams That’s for sure

Madonna was never bigger than Michael Jackson, let’s be real. That would be almost as ridiculous as saying Janet was as big as Madonna.

The problem for Madonna is that she’s not hated enough, I think. These days, most people don’t really care about her and her music anymore. Michael Jackson was a bit of a star until his death, the hate for him proves that.

Madonna was never even as big as michael jackson if we gotta be honest. If anything, if she’s even this close to him in record sales it’s because she’s released way more stuff than he did and during the peak of album sales (90s, 2000s). I agree when she’ll pass she’ll get closer but I don’t see her surpassing him anytime soon

No thats not true and Madonna is not way bigger than michael Jackson and will never be, even when she dies.
you are talking rubbish on this site and nobody agrees with you even probaby Madonna herself.

Queen is not way bigger than Madonna. At their peak Madonna was bigger than Queen. She sold so many albums in such short period of time. I dont think Queen ever reached that kind of sales. But Queen is off course the better catalogue seller. It is due to decades of catalogue strong sales that they managed to beat Madonna, but at her peak she was bigger. Madonna is a pop act, and quite frankly speaking pop acts are forgettable compared to rock. MJ and The Beatles are way bigger than Madonna.

You’re correct, I think I was purely referring to streaming (youtube and spotify) when I said that.

y’all can’t accept the fact that madonna was actually bigger than michael jackson just because she’s a woman when in reality, she really is the biggest solo artist of all time along with elvis. and she will easily surpass michael jackson deal with it

Do you know what means that no one is supporting what you are saying? That means that you are the only one in the WHOLE site that thinks that Madonna is bigger than MJ. We all love Madonna but please stop it and be realistic.

Well at the time of his death, his sales were around 350M and Madonna over 320M. She was about to surpass him or probably even surpassed him but he died and increased a lot so she probably won’t catch him again since sales are pretty much dead. But in album equivalents trust me she will easily. If Michael was able to do more than 60M in 10 years, Madonna will do +80M. Also it format really matter if she released more stuff than he sid, she’s a woman and michael was a man so he was overhyped

Did* my grammar rip

So embarassing. You are completly delusional.