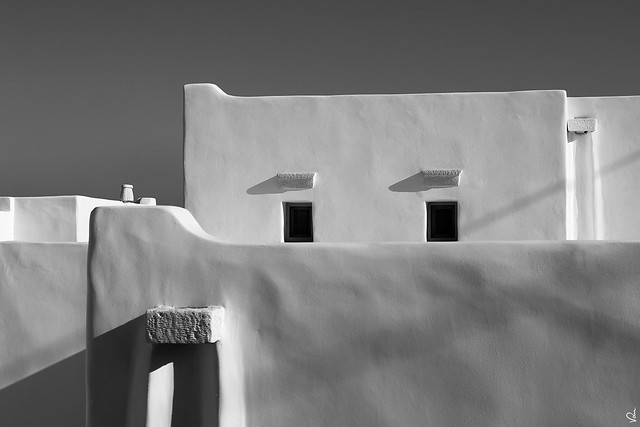 During all our previous studies, we never went through loopholes. By that term, I refer to albums that got issued without the authorization from the copyright’s owner because it felt into the public domain.

It all started in early 80s when the Danish law defined every recording that was at least 25 years old as part of the public domain. Several budget labels started to appear. One of them was All Round Trading which quickly flooded European markets with compilations of 40s/50s stars, including Presley. There have been tons of such releases. Most of them focused on Sun recordings because they were the only ones from Presley that were over 25 years old. Additional labels, often created by the same people, released literally hundreds of similar records. The concerned labels are the likes Astan, World Star Collection, Card, CéDé International, Duchesse, The Entertainers, Success, Platinum, Solid Gold, Flashback, Universe and many more. In each market, as soon as valuable catalogs arrived at the end of the copyright period, the law was updated to let proper labels continue to exploit them. They almost made it to Canada recently, but here too legal actions were taken to block these loopholes.

These obscure releases are often ignored because they aren’t completed legal and also because we don’t know them very well. Once again, Discogs solves the problem in full. We can first check this Billboard article which mentioned the case in 1987 after the extension of the copyright lifetime that made these loopholes strictly illegal in Denmark: 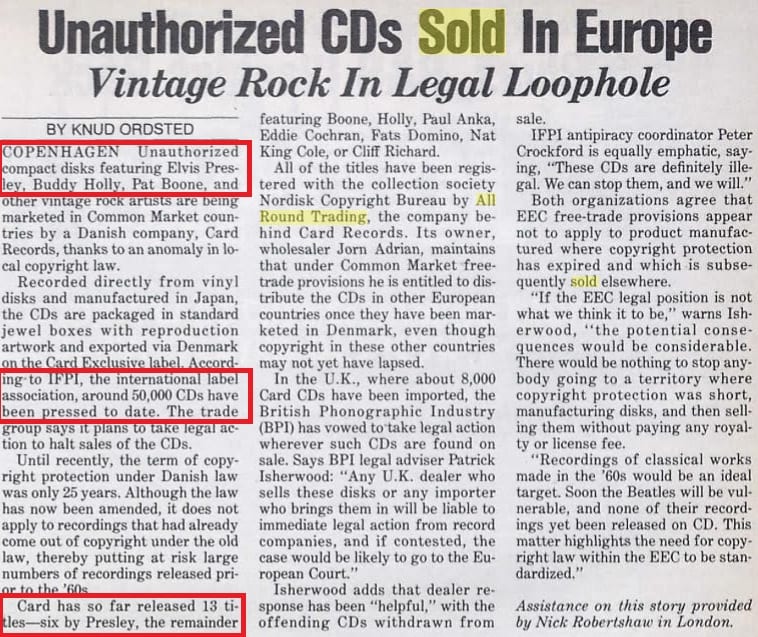 The six Presley records mentioned by the article include the 2 loopholes that are far and away the most collected at Discogs. They are Pictures of Elvis 1 and Pictures of Elvis 2, owned by a combined 975 users. As picture discs, they are highly favored by collectors. That’s why in spite of so many owners, they sold relatively few units. The article points outs 50,000 sales spread over 13 releases, that would imply at best 10,000-ish for the top sellers. Both Presley‘s albums are the 2nd and 4th most collected items from the label.

Jorgensen himself spoke about 4,000 units sold by the top selling bootlegs, although it was more than a decade later. Applying the ratio suggested by Billboard’s article for pictures discs (1 Discogs owner every 25 buyers), average ratio for LPs (1 every 100) and for CDs (1 every 500), we reach an estimate of over 275,000 such albums sold under the name of Presley. Aforementioned Pictures of Elvis albums, 1984’s Astan record 20 Greatest Hits and both Flashback releases from 1987 titled 20 Love Songs and 20 Rock & Roll Hits are arguably the ones that broke the 5 digits mark.

Up to 67 releases, all dedicated to Presley, Elvisone is a true false label that issues frequently rare records about the king. Most of them, if not all, are limited to 500 copies and most aren’t sold out as shown by the number of owners on Discogs that goes down to 0 for several of them. They are estimated on 15,000 units sold cumulatively.

With Weton-Wesgram, we reach cheap budget European releases that are still 100% legal since they are licensed to copyrights owners. The manufacturer Weton-Wesgram is responsible for 26 distinct Presley tagged compilation. Most of them were sold in the UK from 2007 to date with many charting inside the Budget list. The most owned and best charting album among them is the 2007 Orange Collection at 25,000 units. In total, albums from this label sold 7 times this number.

One more budget label that flooded the UK market from 2007, Go Entertain is up to 9 Presley albums. They are fairly impressive sellers. The Original Recordings stands on 180,000 units scanned as per the OCC, while both the volume 2 and 30 Original Hits sold enough to be Silver. As usual, working with proportion of owners among the albums that charted and the ones we have no data about tells us CDs from this label stand on 380,000 units sold, an impressive rate of 35,000 per year, most of which in the UK.

Unlike the previous labels, Not Now Music focuses on releasing quality packages. Up to date, 14 were Presley‘s records. They can be LP reissues or extensive compilations. Strongly praised by collectors, they are owned by a lot of Discogs users. The Platinum Collection from 2012 has 243 owners from the UK. It is no surprise as the set stands on 125,000 sales over the counter to date. All 14 releases add for 195,000 sales to date.

Speaking about quality releases, the label Memphis Recording Service has been packaging carefully rare recordings of Presley. Joseph Pirzada, who works for the label, was kind enough to provide us sales data for these records. Big thanks to him.

The label issued 14 more releases. They are more extensive and expensive, ultimately selling less than 5,000 units a piece. They still add for roughly 50,000 sales combined.

Although we already went through many records, there is still 140 releases from various budget labels like Delta, Delta Leisure, Disky, Hallmark, among others. Both chart activity on budget rankings and Discogs owners continue to provide us enough data to accurately gauge their sales. The biggest of all in Europe is The Incomparable from 2008, this Delta Leisure box set sold 50,000 units. These albums combine for 875,500 units sold. They will all be listed inside the upcoming CSPC article.

If u really dont trust this site. Go to other site that makes u happy. Why are u wasting so much time here. In fact even better, go and make ur own website with ur own estimates since u r so good at it.

Sorry but you bored me 30 odd days ago with this. The guys at Chartmasters do a wonderfull job and are making a real difference to the world of the most accurate data on record sales, far better than the old unreliable and grossly over estimated sales , mainly coming out of the USA and especially on some of the so called big acts like Elvis, The Beatles, Led Zepelin , Madonna and Pink Floyd. Let’s all just be greatfull that Chartmasters team are doing, which is far far better than what we had before. You are obviously a big… Read more »

Maybe he has bored you, but a lot of what he says is relevant and does bring up questions that should be looked at. He obviously is a big Elvis fan, but he seems more concerned about accuracy/innaccuracy, than being hurt because the figures are not as high as some of the ludicrous claims made.

Why not we all have the right to our opinions, one of the few things we have left!

Hi! Talkin’ about blockbusters…: how about Portugal, Greece, Japan and South Africa?

Do you mean Elvis’ top sellers there or all-time biggest albums?

Both, if possible! Elvis and international acts, NOT locals!

Discogs is really sheding a light on the industry’s more “unknown” territories. I was not aware that countries under the iron curtain could even buy western music legally. And what comes as an even bigger shock is that the numbers are actually quite big. If western albums were able to sell hundreds of thousands of copies in the Soviet Union it makes me wonder what numbers local stars (probably favoured by the state as well) could do.

I was born in the USSR, i remember my dad had the entire Beatles catalog on vinyl.
And i second the curiosity about local artists, I’d love to know how many records Alla Pugacheva, or Aria sold.

I think its about time for his results already. Or if his is not ready. Its time for new updates on existing artist studies or new study on new artis. Its getting kinda boring.

I think the Elvis Presley analysis will be uploaded this weekend, at least that’s
what i’m hoping for.

He said this week so it can be even today.

The writting of the article is 90%+ completed, it will be online tomorrow 🙂

This isn’t really a site for fair-weather fans and those who only care about their favorite acts.

Well, he did discover a new formula to add to everything he’s already doing with the “hidden sales” Plus he made a comment how Elvis is coming with quite a bit more coming quickly after that, so I’m thinking after Elvis, we are going to see a handful of acts pretty quickly

MJD,
this is probably the first of a long list of questions:
you say that Elv1s 30 # 1 Hits and The Essential Collection sold over 75.000 units each, but the first has 19 owners, the second 6 owners.
And I don’t understand that….
🙂

Hi Luca! It has to do with the period. 30 #1 Hits continues to sell, so even if CD compilations aren’t much collected, there is still many Discogs users who have it. 90s comps are among the worst albums in terms of conversion rate from Discogs owners to real purchasers, because they sold large amounts to casual buyers that aren’t music fans back in the day. For example, Lionel Richie’s Back to Front from 1992 has only 2,675 owners against 5,937 for 30 #1 Hits, although they sold similar numbers. That’s why we always need to use a factor that… Read more »

Thanks! I’m trying to understand the mechanism! And of course I’m tryng to applicate it to Neil Young. Beginning with Harvest, not my favorite album, but his bestseller. Adding all the LP (and only the LP) releases in Canada and in comparison with your Elvis examples in Canadian Blockbusters, we have a total amount of 1.000.000/1.200.000. I’m wrong? The figure seems really high! But probably I’m wrong something…

How have you weighted its owners? I haven’t check details about Canadian editions, but from the worldwide total of 58,533 owners we can see Harvest is massively collected (more than Dark Side in proportion). For example Aloha from Hawaii has roughly 40% of its sales globally but only 13% of its owners (7,501). If we use this album as the scaling point, Harvest would need ~5,35 owners to equal to 1,000 sales.

2972 owners, for the Harvest LPs in Canada

I respect Elvis and all but I think Nicki Minaj is a little bit more famous and deserves to have all these articles on her before him.

Hi MJD. These articles make me wonder – with all these new techniques to evaluate sales, (like the revolution brought by Discogs), does this means all previously studied artists (like Queen, Rolling Stones etc.) have black holes and undiscovered sales to uncover?

Hi Dan! As a general note, new techniques are always welcome, especially when they are as efficient and detailed as statistics from Discogs! Through the last 2 years, I came up with a lot of methods when the need was felt. When I’m not satisfied with an estimate that isn’t enough under control (and thus with a large margin of error), I go in and out every possible source to find a solution. That’s why in 2 years I went from ‘estimates’ spreadsheets to Excel files full of formulas / macros that treat raw data with 0 room for what… Read more »

Thanks for the detailed answer!

YOU ARE ALIVE!?!?
I missed you

Everyone, please stop with this kind of joke. It isn’t funny.