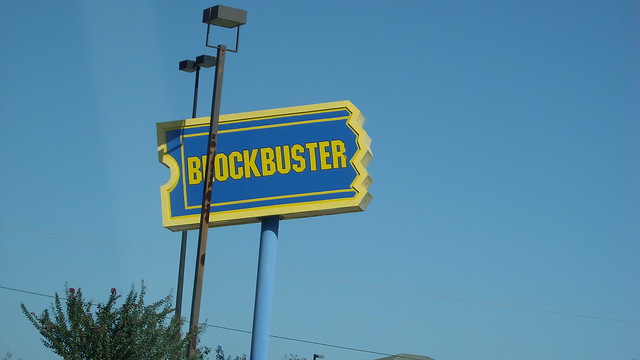 As always, if a statement is true then it must be possible to prove it with real figures. How can we determine those potential buyers? The first instinctive information is the number of inhabitants a country has. Then, we must think about households, as the average number of persons per house went largely down in recent decades. Continuing the reasoning, not all houses used to have a record player.

This link will give you the number of households in the UK, while this one tells that by 1982, just before Thriller album release, 83% of them was equipped with a record player in that country. As every computer or smartphone is now a worthy record player, let’s assume that number increased regularly up to 100% by 2011. What happens if we compare that number of record players in use (right axis) with the sales of the yearly #1 albums (left axis)? 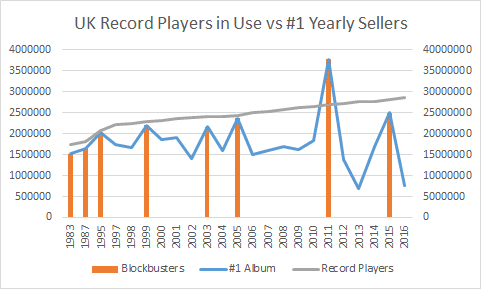 We saw that the #1 album wasn’t following the market curve at all. Thanks to this graph, we have one new enlightening conclusion – blockbusters of very different era perfectly followed the path of potential buyers as represented by the number of record players in use. Michael Jackson‘s Thriller and Bad, Robson & Jerome eponymous album in 1995, Shania Twain‘s Come On Over in 1999, Life For Rent by Dido and Back to Bedlam by James Blunt in 2003 / 2005, all those albums validate completely this theory. One potential buyer every 10 bought those albums on their respective big years. A terrific achievement.

From 2006, we see that non-blockbuster albums that were still big enough to top the annual charts were failing to come close to that 1:10 ratio. Year after year, downloads impacted those hit makers albums which lost ground more and more. In 2013, only 1 potential buyer out of 40 bought the #1 album of the year.

Once again, facts prove this situation. When we compare the annual #10 annual to the potential buyers, we can see a striking collapse of regular consumers. From 1998 to 2006 they used to be bought by 1 potential buyer every 18, as shown by below graph now it is 1 every 57. 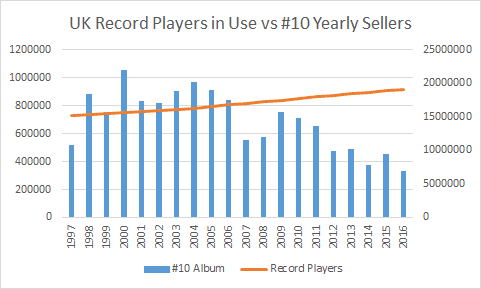 Both albums by Adele proved the potential buyers argument continues to be 100% true. Divide by Ed Sheeran will also hit the blockbuster line in full this year. The figure of 21 by Adele is intriguing though – how is it possible that it sold so much more than the norm in relation to potential buyers? If there is one thing positive which has been brought by legal downloads, although the British diva is almost the only one that was cross-generational enough to benefit from it, is that they broke the household limit. During the 80s, the standard was to own one record player per house. It continued to be true during the 90s even if cars helped in adding some potential when their cassette format was distinct from the in-house record player, often a CD player. The arrival of iTunes converted every inhabitant into a possible buyer. This is how Adele over-performed so much the norm for record players limited to households as parents got the CD while sons downloaded the record. It enabled the album to be purchased by 1 every 7 potential buyer during 2011.