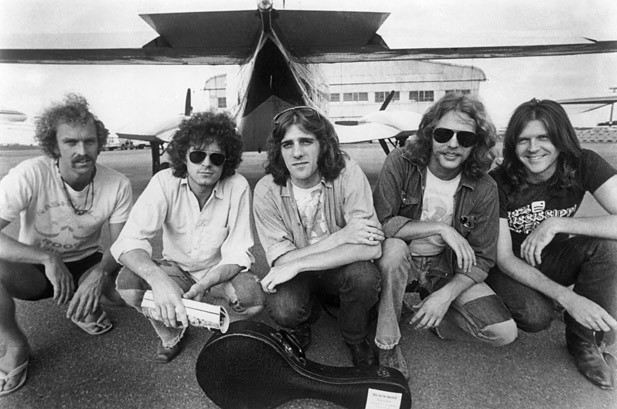 The perfect combination of classic rock, pop crossover hit, soft and easy-listening songs, adult contemporary appeal and a key country touch, the Eagles were one of the hottest candidate to move large numbers on Clubs. They haven’t miss that opportunity.

We will start with an absolute beast. This compilation, issued in 1976, is the second best selling album of all-time in the US behind Thriller by Michael Jackson. A five weeks #1 smash upon release, the Eagles had the good idea to drop the monster album Hotel California just a few months later. As millions of people ran after that new record, they completed their Eagles collection by picking Greatest Hits 1971-1975 which covered their previous four albums.

As you can see, the album went Platinum almost instantly. It was then certified at 12 million units in 1990. You must be aware that multi-platinum awards were introduced in 1984 only, which explains why awards came so late. During the next four years and a half, the album went 14xP and then 22xP, bringing the question how come this record sold so many copies in such a short time so long after its release? Quite simply because it hasn’t sold that many copies during that time frame.

The certification from 12/14/93 at 14xP is interesting. The album had sold some 1,7 million units since its previous 12xP award. In the meantime, from January 1991, Military sales were made eligible for RIAA certifications. As both awards – 12xP and 14xP – weren’t date specific, the album was anywhere from its certification level up to the next plateau when the award came in. In order to not over-estimate Club sales, let assume the album had shipped as much as 14,9 million when it was certified 14xP.

Just two weeks later, from January 1994, all Club sales were made eligible too. The impact? A terrific jump to 22xP by 1995, just 18 months later, while the album sold only – relatively speaking – 900,000 units during this period. At best, the record was up to 15,8 million if Club sales were still not eligible, but they were and they sent the record to a gigantic 22 million, representing at least 6,2 million Club sales. Of course, this included a few unscanned sales like on specialized Country retailers which weren’t fully tracked at the time, but the huge majority of those 6,2 million ‘new’ sales came from Club sales, so let make it easier and use this language shortcut referring to all non-scanned sales as Club sales.

End of story? No, there is more to say. As this 1995 audit was the first after the rules change, the album could have been anywhere from 22 million to 23 million. Thus, we need to also check following certifications to mature our estimate. The next award was a 24xP certification on 03/03/97. At that point, Greatest Hits 1971-1975 had slowed down. After registering 139 weeks inside the Top 10 catalog chart from May 1991 to June 1995, it never went higher than #20 from that date til March 1997 certification. This was still enough for more than 450,000 units scanned. Now that no rule changed, how come the album gained 2 more millions while selling only 22% of that amount? One reason can be old documents fully audit for the first time but as no other album from Elektra catalog got awarded at that moment this is likely. The most realistic scenario is that the album was closed to 23 million by its 22xP award. Then, it added 450,000 units through retailers, but it was also still selling at clubs. Giving their incredible strength during that period, it isn’t unrealistic to expect more than half a million new sales from there, thus pushing the total to 24 million. The key point is that this moves Club sales from a minimum of 6,2 million to 7,8 million.

Let move directly to 29xP certification from January 2006. This was the first award of the album since the fall of Music Clubs. At Soundscan count, the album had added 2,4 million more units since its last award. Once again, gains at RIAA end were much healthier as it climbed by 5 more millions. This proves the album was still selling very well on Clubs. This is very visible with the million gained during 1999 within’ 10 months in spite of the record never charting inside the Top 50 Catalog ranking for this period. So this is 2,6 million more coming from non-scanned areas, sending the overall tally of such sales to a mind blowing 10,4 million units.

The album was by far the highest charting catalog record at BMG Music Club all-time list:

Is it realistic to expect 8,9 million units sold at Columbia House? At that Club alone, no. Factoring in other Clubs – after all, although dominant, Columbia House plus BMG Music Club added only for 70% of all Club sales in the 90s, even if remaining Clubs were often specialized ones – unscanned sales, Country retailers, direct sales at live gigs, post-1993 military sales, the tally of 8,9 million turns out to make sense. After doing many researches, this album was almost always present in Columbia House listings for a full 25 years. In 1980, In 1982, In 1984, in 1987, in 1989, in 1995, in 2002, the album never stopped being well presented within’ the club ads. If one consider Greatest Hits 1971-1975 wasn’t a one-time but a steady seller over years, the fact it was available twice longer at Columbia House than at BMG Music Club is important. It gets even more telling when we know the Eagles targeted public was closer to Columbia consumers rather than BMG ones. When everything is took into account, sales of 6 to 8 million units at Columbia House alone isn’t that much far-fetched.

Oh, between, can someone tell Eagles label this album sold an extra 1,1 million since its last certification?