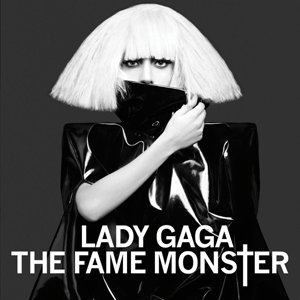 In economy lessons you will learn that you first need to invest, then you will get in benefits of your efforts. The Fame was the investment part of this era in France, The Fame Monster was the incoming part.

An expanded edition of the original album added an EP to the first album, this EP was The Fame Monster which contained eight new tracks, almost worth to be a stand alone album on its own.

Have you ever read me speaking about music artists as boxing challengers? One can look at sales results of artists for years without ever noticing it, but there is definitely a league system inside the music industry. During one full year, in spite of various successful hits Lady Gaga album failed to make it into the Top 20, just like various similar albums by other artists a la P!nk, Justin Timberlake, Rihanna or Beyonce records.

This is due to those artists being considered as B-League artists in France. To schematize things, a C-League artist will typically be promoted mostly on radio and on a few specialized music channel, as it will be considered with a decent selling potential in its specific target but with no widespread appeal. A B-League artist will have a widespread appeal but only among regular music consumers. Those will be usually big foreign artists that will be very popular among people following a bit music world, but won’t sell a thing to the huge 30+ section of the public that buys mostly local music, this will usually limit sales potential of an album to some 2-300,000 units.

Then you have A-League. In France, you may call them TF1 artists. The TV channel monster turns every 200,000 units selling album into 500,000+ units seller. Artists promoted at this level are huge local acts, popular TV show contestants and a handful of major international artists like Michael Jackson and Madonna.

Back to Lady Gaga, after her highly successful run everywhere in the world during 2009, her major decided to upgrade her in France from B-League to A-League lists when The Fame Monster was released. That’s why after spending 66% of her 2009 promotional budget (1,67M€) in M6 TV spots, nearly 100% of pre-November promotion, the trigger completely changed after that release as investments backing her during 2010 (2,87M€) were at 96% invoiced in TF1 support.

Was it worth it? Well, yes. If the album failed to chart higher than #22 during its first 58 weeks, it never charted below #13 in the 48 weeks after the marketing switch. One may think it was due to new singles. If they obviously helped, the promotion in France was late on other countries and as a result when the expanded edition got released in November, Paparazzi, which is part of the original album, was still being sent on radio. A #6 hit, this song wasn’t strong enough to justify how The Fame Monster held 15-14-16-18-11 during the immensely competitive Christmas season after climbing 76-15 upon the new version release while Poker Face or Just Dance had much minor impacts on weaker periods. If the album sold so well from that point was ironically not especially thanks to new songs, but thanks to the success of early hits that opened the doors of big promotion for the remaining life of the album.

After selling almost 95,000 in its first 14 months in its original form, the album (both versions have been combined in France) sold an additional 80,000 copies in those five last weeks of 2009. It was only the beginning yet.

The #1 hit Bad Romance, also 6th most downloaded song of the year, added to the decrease of Christmas cash-ins from January, shot the album 18-11-3 in a fortnight. Registering five weeks at #2, the album missed the top spot because of the Black Eyed Peas album The E.N.D.

Telephone duet with Beyonce #3 in April and Alejandro #3 in June held the album inside the Top 10 during an impressive 36 weeks. While the promotion was completed by the end of the summer, the eight (!) hits available on The Fame Monster continued to amass significant enough airplay to maintain the album inside the Top 25 every week until the end of the year. For the second time in a row Lady Gaga was the third most aired artist of the year.

In the meantime, this success was exploited too with the release of The Remix in May 2010. Debuting and peaking at #8 in the Compilation chart, it sold nearly 50,000 units by the end of 2011 proving to be a solid mid-run seller.