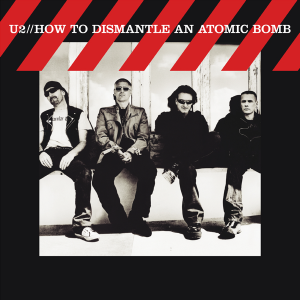 Up to six consecutive Platinum selling albums, a rare feat for international acts in France, U2 return was heavily anticipated in 2004. Pairing their new single Vertigo with iPod extensive promotional campaign, the album How To Dismantle An Atomic Bomb was everywhere.

This new record reproduced very exactly the run of its three predecessors, #1 debut, a bit more than one month Top 10, then several months floating around lower down the charts without ever coming back into the Top 10 and then a natural drop out. Even in Year End position all U2 albums were quite close as Pop was 1997 #16 album, All That You Can’t Leave Behind was #19 of 2000 and now How To Dismantle An Atomic Bomb closed 2004 as the #18 seller of the year, a huge result within’ a mere five weeks.

Both Sometimes You Can’t Make It On Your Own and City Of Blinding Lights did nothing in the singles chart but stabilized the LP until the end of August 2005. By the end of 2008, this album had sold 474,000 physical units and 6,000 digital sales.