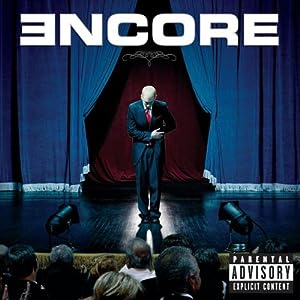 With previous album The Eminem Show up to 900,000 units by the time of Encore release, this new Eminem album was once again highly hyped. This set wasn’t helped so well by its lead single yet as Just Lose It underperformed. Despite debuting at #7 thanks to the artist fanbase the single dropped out of the Top 10 by the following week, showing very few legs.

The album results were logically quite similar as after a strong debut – #2 and then #1o on its first full week – the LP went down faster than previous albums. It still lasted seven weeks inside the Top 10 while selling 260,000 units in 2004, but the year 2005 was awful.

Second single Like Toy Soldiers (#34) completely failed to help the album that dropped from #10 in December to out of the Top 200 in April, exactly during the period covered by the single. Encore shipped over 300,000 units by May but never needed additional copies during its promotional campaign.

The 2006 fall was the one of Eminem Presents: The Re-Up, an album with various of his label partners that was closer to a mixtape than a proper album. It debuted at #41 with 6,140 physical sales. Dropping out after 11 weeks, the set sold 24,000 units during that time span.