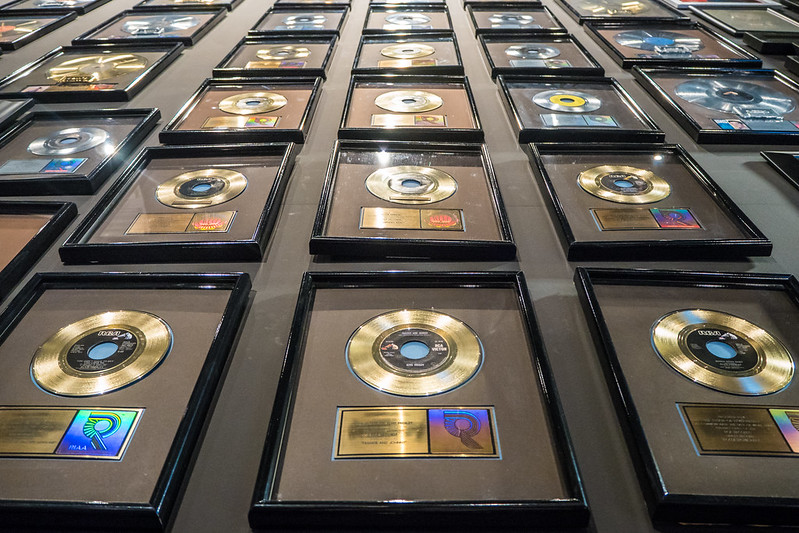 RIAA’s view of a catalog

When we look at Presley‘s discography, it is important to distinguish legitimate releases and duplicated ones. How is a promo single treated? A reissue of an album? A box set of existing material? False answers are assumed more often than not so let’s clarify these points.

Promo records are easy to treat. They aren’t made for sale, so even if they can now be purchased as collectors on second-hand, they aren’t accounted for on official tallies. They make up for nearly 10% of Presley‘s singles listed on discogs.

Many claimed that remastered packages of the American legend are excluded from his certifications because they break RIAA rules. The argument is that at least 75% of the content must come from the original release, so if a studio album has 12 tracks, it can only be extended to 16 tracks. If the reissue has 17 songs or more, it is considered as a new album by the RIAA. This is strictly false. The 75% rule was printed as below on RIAA website:

*Enhanced CDs must contain at least 75% of audio content of regular CD.

Thus, the point is not to add at most 4 songs to a 12 songs album, but instead to keep at least 9 of its tracks into the new edition. That’s why massive reissues like Lady Gaga‘s The Fame (extended from 14 to 22 songs), Katy Perry‘s Teenage Dream (from 12 to 19) and Michael Jackson‘s Thriller 25 (from 9 to 16) saw their sales certified along with the original album. Since all reissues of Presley contain the original songs along with new ones, they are all accounted for by the RIAA. All but one: his 1957 Christmas Album was reissued under a budget line in 1970. Out of the 12 original tracks, only 8 remained inside the 1970, which explains why they are 3xPlatinum and 10xPlatinum, respectively, instead of 13xPlatinum combined.

On top of reissues, we need to raise the point of box sets. The RIAA states the following about them:

*Each unit within set counts as one unit toward certification.

We tend to interpret from this rule that a double album which sold 1 million units can be certified 2xPlatinum. It’s absolutely true, but there is more about it. The RIAA states each unit is counted, but it puts no restriction about the receiver. In other words, a CD inside a box can be certified as part of that box… or by itself.

This rule is pretty infamous among Presley‘s fans since Garth Brooks has been challenging his RIAA platinum tally precisely by using it to death. Ironically, they also increase Presley‘s awards. Sales of packages like His Life and Music, Top Album Collection Volume 1, Top Album Collection Vol 2, Original Album Classics, The Collection and many others are eligible for all albums included into them. All of them include the bar codes of the original albums.

While these kind of releases are often disregarded, it is ludicrous to expect RCA / BMG to ignore shipments of these CDs into original releases, especially since box sets haven’t sold enough to be certified on their own. In fact, these packages are keeping alive many original albums, enabling them to be hit new certifications even if they are selling close to nothing on their own for very long. It means that when one adds sales of His Life and Music to Presley‘s catalog, he is double counting them since they are already included into the sales of the individual records on it.

Nevertheless, t’s still important to estimate these releases since individual albums haven’t always reach new awards afterwards. For example, among the 4 Golden Records volumes inside His Life and Music, only the first one was updated by the RIAA after the release of this package in 1994. Still, it is fundamental to avoid double-counting for all albums which saw their certification upgraded precisely thanks to these boxes.

But who makes Time Magazine the arbiter? Who decided that Elvis be described as ‘just’ a singer? Following that logic then only artists who write material would qualify for inclusion. We need to know the criteria that Time adopted and how they came to define this criteria. What were the parameters they set, how were they determined, by whom, and what ‘quailified’ those individuals to so do? Such determinations are very subjective and ignore other factors. John Lennon said, “Before Elvis there was nothing!” Any number of artists have cited Elvis’s Sun singles as the greatest rock’n’roll recordings ever. It… Read more »