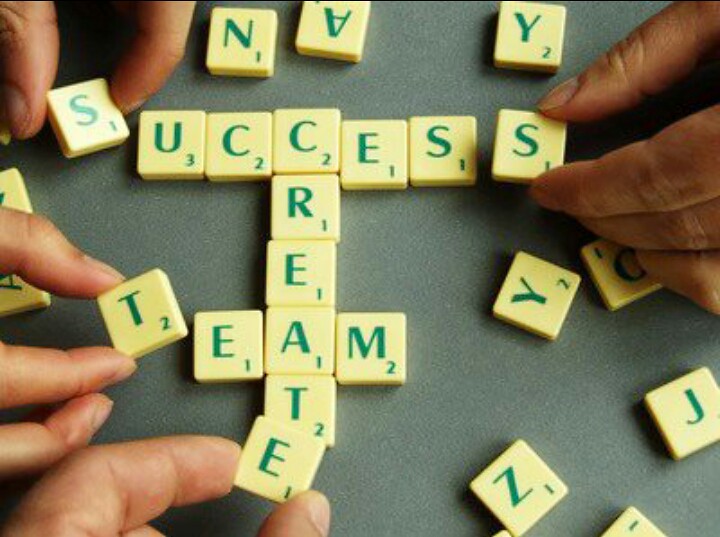 Thanks to our CSPC approach, we can establish the relative appeal of every song of an artist’s discography. They are expressed in cumulative Equivalent Album Sales (EAS) generated through every format, including as part of studio albums and compilations. By extension, we can also define the share of the appeal of a catalog that is contained in every record. For example, as we said previously, when you buy Legend you buy 67,5% of Marley‘s catalog. Cumulative EAS of its songs add for 91,4 million which would make it the second most valuable album ever after Thriller if it was a studio record. On its side, the purchase of Kill ‘Em All will only provide you 5,6% of Metallica‘s discography.

This is where an incredibly powerful and fascinating approach strikes in: the Equivalent Discography Sales (EDS). In fact, we always define the value of a catalog in equivalent album sales. We can analyze data deeper to establish how many equivalent discography sales an artist attained.

The application of the method is simple: for every pure unit sold, we factor it with the percentage of the artist’s discography value that the record’s songs represent. Streams are weighted with a 1/150 factor to be on par with singles as it is a song-consumption.

You may feel concerned by the fact that singles are on par with albums. In reality, they are organically weighted down by their own content. Since they include much less tracks than albums, their EDS are necessarily lower.

One more concern when we discover this approach is, is it really needed? We already mentioned the case of two artists who sold 50 million EAS each as per the CSPC methodology, the first one with 10 albums, the second one with only 2. You will no doubt agree that while the cumulative worth of their catalog is on par at 50 million EAS each, the second artist has been more successful. There is several issues of this kind who are fixed by the EDS concept. Let’s review them!

Who will be impacted?

Organic weighting of the size of the discography

To better understand the power of this method, here is the aforementioned fictive case detailed. We assume that both artists sold exclusively albums to make it very simple. 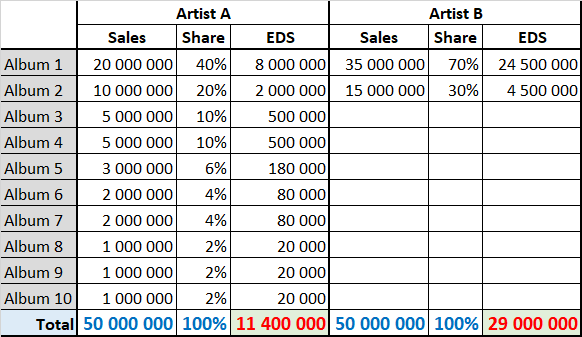 As mentioned, both artists sold 50 million albums. The artist B did it with 2 albums only while the artist A did it with 10 albums. Our EDS indicator confirms that the Artist B is the most successful. It has sold 29 million times the value of its entire catalog, mostly thanks to 35 million sales of a record which contains 70% of its catalog’s worth. The artist A’s albums sold the same but through lower shares of his catalog, which are owned by less people, which means his popularity is weaker than the artist A.

Many of you pointed out the issue of features. Nowadays, songs involve more and more singers and a couple of lines give you nearly as many units as releasing your own song. The EDS indicator fixes this flaw. How?

Sales of all records are weighted with their worth in terms of EAS.  How is the EAS counted? It adds:

This bolded element explains why Love The Way You Lie brought 3,18 million EAS to Rihanna‘s total, but 5,21 million to Eminem‘s total since he also sold tons of copies of Recovery thanks to this song. Since this EAS is used to define the worth of all recordings, the strength of features into an artist’s discography will go down. Indeed, we will see on final results that the EDS of Rihanna‘s authentic songs are over 20% higher than EDS of songs on which she is only featured.

Organic adjustment of the market size

I’m sure you must wonder how an indicator which is based on record’s sales can off-set the evolution of the market size. It’s simple: artists popular when the market was healthy amassed tons of sales thanks to tiny shares of their catalog. As we will weight them with these shares, their value will go down.

The best example may be Madonna. Her regular buyers were there from her first eras and then they have been given tons of chances to buy her new albums. Her main greatest hits collection for most of her career covers only the first part of her discography while she also sold various singles. Her second major compilation included distinct songs from the first one, meaning they weren’t cannibalizing each other. Basically, her buyers have been consuming her discography bit by bit which fuels her comprehensive sales. Logically, all artists who peaked during the 90s and issued various records in these years have a success indicator lower than their CSPC ranking.

The opposite situation is true for a band like the Eagles. Their early albums were issued when albums sales were notably lower so less people bought them during their promotional campaigns. Instead, they picked best of compilations when they got into buying music meaning that their catalog was consumed through worthy packages, all at once.

Organic adjustment of the catalog structure

It is the first impact that has been mentioned as it was highlighted by the comparison between Bob Marley and Metallica.

A natural though to contradict this impact would be that without Legend, there is no evidence buyers would have go on to buy multiple albums from Marley. I’ll take a couple of minutes here to go into that case. Nobody buys a complete discography in one time. We must wonder how have bands like Metallica, AC/DC or Led Zeppelin sold their full catalog to so many people? You first need a trigger, a banger single that will bring a large amount of people to one of your albums. We are talking about hits like Enter Sandman, Back In Black and Stairway to Heaven. This trigger will push the regular buyer to go after Metallica, Back In Black and IV. He plays these records multiple times and likes them, he feels this was a worthy purchase.

The regular buyer as part of their target audience also listens to rock radio stations, so he knows they got additional hits that he also likes. Thus, once he is done playing the big smash album of each he will buy Highway to Hell because he likes the title track, …And Justice for All because of One and II to get Whole Lotta Love. The virtuous circle is created. The loop goes on and on and on and after a few years, he will own most of their records.

The one who would have gone after Exodus would have known and liked Is This Love, ending up buying Kaya. Then Natty Dread to get No Woman, No Cry. Then he goes after Uprising because he likes Could You Be Loved and Redemption Song. Two more essential songs, Get Up, Stand Up and I Shot the Sheriff are part of Burnin’. Stir It Up comes with Catch a Fire. After a few years, someone appreciating Marley‘s songs and regularly buying albums would have got several of his records too, if it wasn’t for Legend which contains all popular songs. Since that’s the way buyers act for all artists with no compilation, there is no reason to believe they would have done otherwise for him. The assumption would be the opposite, claiming that a regular buyer wouldn’t have bought more records from the singer when they contain popular songs!