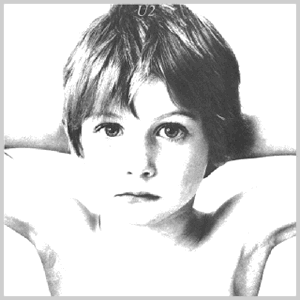 U2 albums have been heavily anticipated for so long that it is hard to figure out how one of their album was received when they were still unknown. As it was often the case in those years, bands had first to prove their appeal with their first few releases and on stage before getting strong promotion.

The Irish band was no exception and Boy first came out with very little fanfare in October 1980. Surprisingly, the album debuted in the US before debuting in the UK. It happened in March 1981 with the set peaking at #63 on a 20-weeks run inside the Top 200. In UK, the album waited until August before debuting on charts to ultimately peak at #52 on a 9-weeks run inside the Top 200. Peaking at #38 in Sweden or #13 in New-Zealand, higher than in UK, this album was proving the band label that U2 had the potential to become a global phenomenon.

What about France? Well, with no tour date in France, no single promoted and a chart limited to 25 positions, unsurprisingly Boy never appeared on this country rankings, selling a few thousands only.