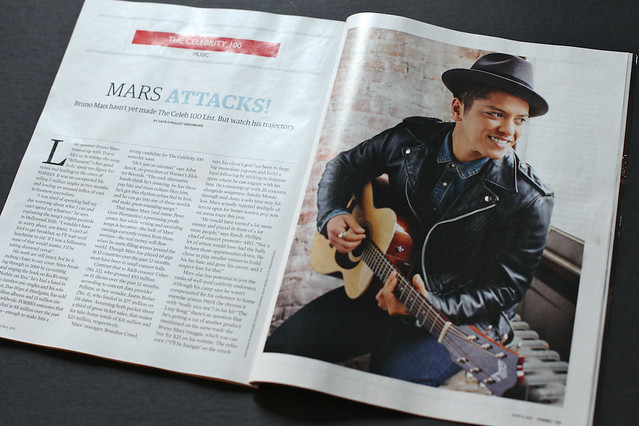 Obviously, the most albums an artist released, the most interesting it gets to study his discography. Bruno Mars is up to two albums only but his success has been so consistent that he makes it worth it to have a look.

Do you remember that Motown-like 2010 worldwide hit by Cee-Lo Green, Fuck You? This song was both a beginning and a conclusion.

A conclusion of Bruno Mars career of rewarded but unknown writer and producer for the likes Sugababes, Alexandra Burke, Adam Levine, B.o.B., Flo Rida, Brandy or of course Cee-Lo Green, among others. Just a few months before Fuck You, Bruno Mars indeed started to break the main audience by being featured on Nothin’ On You B.o.B. song and Travie McCoy‘s Billionaire, two songs which sat inside the US Hot 100 Top 10 at the same time in June 2010. By November, Bruno Mars was doing one more Top 10 double with the aforementioned Fuck You as well as his own debut hit, #1 single Just The Way You Are.

As this singer targets mostly a young audience, it is difficult to sell large amounts of albums even with big singles. So two questions remain, how his singles performed in France and how much support they provided to their parent albums? Please be aware all Spotify figures refer to worldwide streaming as they only aim to display which albums still have strong catalog hits as of now. Let’s go!