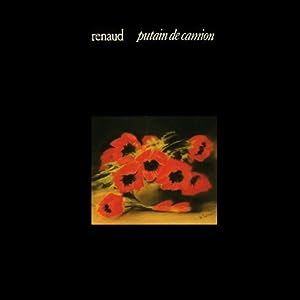 The cover as well as the title of the album which means Fucking Truck is a tribute to comedy actor Coluche, the most iconic French humorist ever and likely the most loved famous person ever in the country. A close friend of Renaud, he passed away some months prior the recording of this record on a tragic crash with his motorbike against a truck.

This event plus the growing negative comments by Medias surrounding his role of a virulent criticist and social ideas defender while he was making millions let the artist tired of the industry. As the artist always remained authentic, he followed his ideas with acts by not promoting the record at all. He went on a tour to met his fans but no single of Putain De Camion was ever released.

Praised by critics and receiving incredible word of mouth the album not only debuted at #1 in April 1988 thanks to Renaud fan base but also stayed 32 weeks in a row inside the Top 20.

As it went Platinum, now 300,000 units, very fast, this impressive hold despite the lack of singles enabled the record to cross the newly introduced 2xPlatinum level in 1989 after the album chart life, some 600,000 copies sold.

If both Morgane De Toi and Mistral Gagnant had surprisingly no corresponding live albums released, in 1989 the iconic Visage Pâle Rencontrer Public was issued. It peaked at #6 and sold a calculated 147,000 units, it was certified Gold in 1989. Speaking about Mistral Gagnant, his strong catalog sales catapulted it up to Diamond award, 1 million sales, in 1989.