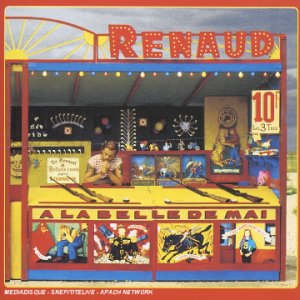 In November  1994 Renaud was back to original French music with his new album A La Belle De Mai. If Marchand De Cailloux entered behind Jean Ferrat 1991 album, A La Belle De Mai ironically dislodged the new Jean Ferrat album from the top spot. It remained there a couple of weeks before the Beatles Live At The BBC reached #1.

Top 10 during all the Christmas season, the set went Platinum in December less than two months after its release. Selling a calculated 306,000 units in 1994 and 155,000 in 1995, the album although not rated his best reminded Renaud was still a powerhouse of French music industry.

This led his major to sell his catalog again. Nothing less than four distinct packages were released:

At the same time, Polygram fully audited all Master Série albums in December 1995. The one of Renaud, issued in 1983, went 2xGold.