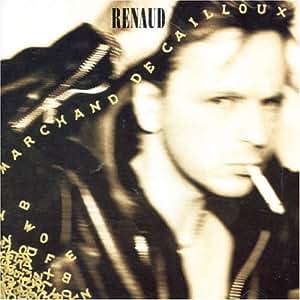 While by this 1991 release the status of monster seller was no more for Renaud, although he was still moving relevant amounts, the artist commitment was still as strong as ever. On the back cover of this album can be read in French Recorded […] in London […] during their dirty war, a clear opposition to the Gulf War.

This album is also the first album with strong references to some local music. In following years, the artist was going to record several lower profile themed albums as we will see. Marchand De Cailloux sound is Irish-music oriented, a real departure from his past rock albums.

Chart wise it entered at #3 behind new Jean Ferrat album and Dire Straits. Subsequent monster releases by Patrick Bruel and Michael Jackson pushed Renaud album lower but it still remained Top 5 during six weeks and Top 15 the entire Christmas season, selling a calculated 222,000 units within’ 1991. In 1992, the set registered ups and downs inside the Top 50 until September rush of releases that ended his run, it still added 220,000 copies in the process and one more Platinum award.