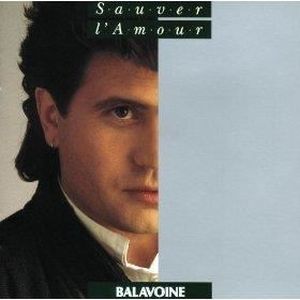 With Renaud, Francis Cabrel, Jean-Jacques Goldman or Michel Berger, France loved anti-star, authentic singers with strongly engaged lyrics. Daniel Balavoine was the high-pitched voice of the pack, the shyest of them but also the most passionate. If he has been much less present in this master series than the others, it is barely because he has gone too soon.

In fact, when releasing this album in October 14 1985 while only 33, nobody guessed that exactly three months later, in January 14 1986, Daniel Balavoine would die on a tragic helicopter crash while assisting to Paris-Dakar race. Obviously this event generated a massive movement from consumers with the album selling gigantic amounts. The artist was big by himself yet being successful before the sad happening.

Balavoine struggled a lot in early 70s, releasing various singles and albums from mid-70s that bombed. In 1978 his hit Le Chanteur broke the main audience yet, both the single and the parent album sold well over half a million units. At the same time, he starred a newly released musical, Starmania, that would go on to become an absolute beast, ending as the most successful musical ever until 20 years later and the arrival of Notre-Dame De Paris.

A successful singer thanks to that ground breaking year, the artist turned into one of the most loved personalities overall in 1980. That year, his deep commitment on his songs from the album Un Autre Monde (translated “An Other World“) like Mon Fils, Ma Bataille (translated “My Son, My Fight“) and Je Ne Suis Pas Un Héros (translated “I’m Not A Hero“) as well as the way he incredibly shut down live on TV the candidate to the presidential election François Mitterand – that would end up winning – made him the idol of a generation. After five golden years in 78-82, his 1983 album was slightly less successful, but Daniel Balavoine came back even stronger in 1985 with our album, Sauver L’Amour.

Lead single was a double single containing both L’Aziza and Tous Les Cris Les SOS. Debuting slowly, this item was still increasing again and again prior the death of the artist, climbing every week from its entry at #40 to #9 some ten weeks later. On its side, the album ranked 6-10-11 on the three monthly charts of the fourth quarter, facing strong competition. It sold a calculated 206,000 units in the process. After the passing of the singer that shocked the country, the single rocketed from #9 to #1 while the album jumped from #11 to #1 too. Although jumps were sudden the #1 positions weren’t going to be denied anytime soon. The single retained the lead during an incredible eight weeks, selling in excess of 1 million units. The album was #1 in each January, February and April. It was the #1 artist of March as well but had to settle for #2 due to a multi artist compilation. In May too the set was the #2 album of the month. Sticking inside the Top 10 until August thanks to the second single named as per the album title, a #5 hit, the LP sold a calculated 670,000 copies for the year 1986.

Ongoing sales in early 1987 brought 100,000 more units sold during that year, pushing the overall tally very close to 1 million. It must be noted that the record is still Gold since its release due to his label, Barclay, almost never auditing their records. From the introduction of the Platinum certification in 1980 until the last year before the change of rules, in 1987, they ever certified Platinum only two of their albums, all artists included.

Two albums previously seen in this study, Babacar by France Gall from 1987 and Sarbacane by Francis Cabrel from 1989 contain famous songs that are tributes to Daniel Balavoine. They are respectively songs Evidemment and Dormir Debout, illustrating the impact of this event on French culture.

As far as catalog sales are concerned, Sauver L’Amour was still selling relevant amounts until the release of his Compilation in early 1990. By that time, sales were up to 1,05 million units. The heavy amount of hits packages issued during the last 25 years limits sales of his original albums. Sauver L’Amour still retain some appeal yet as it re-entered the main chart in 2016 during the 30 anniversary of his passing. All three singles from this album also came back on charts for this opportunity. Sales are estimated on 90,000 units during the 90s and 60,000 copies since.

I always thought of him as a good singer but could somehow not relate to his voice, nevertheless starmania I could listen to day and night.