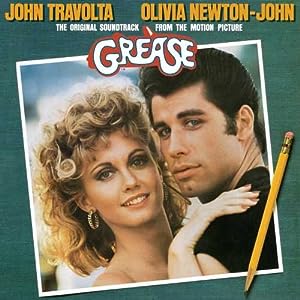 Only a few months after the Saturday Night Fever earthquake, Polydor label made it again with Grease soundtrack.

Released in 1978, Grease movie registered a huge 5,3 million entries in theaters. It was mostly due to the hyped duet of John Travolta and Olivia Newton-John. Not only perfectly pairing inside the movie, the two superstars also recorded together a couple of songs, You’re The One That I Want and Summer Nights.

The first one turned into a tremendous smash dominating the single chart for over three months. With an unreal 1,8 million units sold, this hit became the greatest selling single ever up to that point. The album obviously benefited from such a juggernaut hit taking over in October the #1 spot of unofficial charts from Saturday Night Fever.

By the end of 1978, sales were up to 960,000 units, an unseen figure in French market history except its immediate predecessor. The soundtrack was still #1 until the end of February 1979 yet, adding notable sales that year, climbing its tally up to 1,500,786. After deep researches both figures as well as most other Grease tallies announced at the time in various markets were doubled, counting the number of discs rather than the number of albums. As the bulk of shipments happened before the previous figure, the total sales haven’t climb that much just after that date. The album still went from 750,000 units to an estimated 900,000 copies by 1982, crossing the million by the end of the 80s.

This success was already mind blowing but was everything except over. While the rest of the 80s was rather quiet with LP format steadily disappearing, the CD release of this album was going to be huge. Issued in April 1991, it rocketed Grease up to #3 in the main album chart were it sat an unbelievable 16 weeks inside the Top 10. This release crossed the 300,000 units mark by early 1992, bringing cumulative tally to date at 1,3 million, then 1,4 million by the end of 1994. During the summer 1995, the soundtrack had one more revival, peaking at #4 with eight more weeks inside the Top 10, selling 200,000 copies that year (#40 of the year).

In 1998, the madness happened again for the album 20th anniversary, this time with a #3 peak and six weeks Top 10. The fact this soundtrack is not artist-specific means there is no artist compilation encompassing its singles, thus enabling the original release to accumulate all catalog sales generated by the appeal of its singles. This explains the additional 275,000 copies sold in 1997-1999 and almost 900,000 overall during the 90s. By the end of that decade, overall sales were on 1,88 million. Although this set never had such revival again in later years, it remains an healthy catalog seller, adding 10,000 copies a year on average this century.

Hello Hernán!
Yes, quite sure about it. There is four elements confirming this. First is the sentence that translates into “960,000 double albums sold”. Second is the 2nd/3rd articles stating 1,4m by 1981 and 1,5m by 1985 being very consistant with it, the latter also explicitely mentioning 1,5 million persons bough the double album. The 4th element is the chart run of the album that destroyed the competition during 5 months, including the entire 4th quarter of 1978, which was the best year ever market-wise in France until 1989, in part thanks to SNF / Grease smashes.

Another very interesting piece of analysis and information. I remember that article you are citing from Le nouvel observateur. But I’m curious about something: are you absolutely positive that no double counting was involved in this case? Thanks!