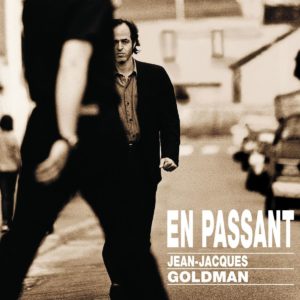 En Passant literally means “by the way”. This is exactly how Jean-Jacques Goldman achieves new million sellers, effortlessly, just like that. This 1997 album was no exception.

Released a full ten years after his last solo album, 1987 classic Entre Gris Clair Et Gris Foncé, and four years after the end of the Fredericks – Goldman – Jones hiatus, En Passant was massively anticipated. The August release date was not standard for such a big album, unlike usual November release date closer to the Christmas rush, or during first semester with more time to build success with no competition. Goldman is just too big to care about such marketing tips yet and the album success proved him correct one more time.

Debuting obviously at #1, predictions poised it to remain there for four weeks. In fact, its 5th week was facing releases from no other than the Björk, Rolling Stones, Elton John, a few weeks after Diana event, Portishead and Boyz II Men. All entered Top 10, the first three were #2-3-4 respectively, as none managed to crack En Passant 5th week.

It took Michel Sardou‘s hyped Salut album to steal the throne from Goldman on its 8th week. Staying strong until the end of the year, the album came close to break the million barrier. It was certified for 900,000 sales in December, before being officially rewarded with a Diamond certification in March 1998. While not trusting the first spots anymore during 1998, the album never left the Top 75 and went Top 20 in December, increasing its total sales to 1,24 million. By the end of 1999, sales crossed 1,3 million as the album was decelerating.

Although it was released nearly 20 years ago, the fact Jean-Jacques Goldman only greatest hits package Singulier was released before this album, in 1996, means catalog sales of it remain quite decent. The smash hit of Génération Goldman covers album in 2012 certainly helps as well – since then En Passant has been very frequently charting inside the Top 100 catalog chart and is still charting this present week as I’m writing this article. It sold an average of 10,000 copies per year this century.