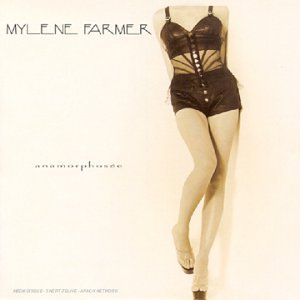 By 1995 Mylène Farmer was no more a newcomer, she was a confirmed superstar. Her previous two albums each passed the million mark in France and sold 4 million units worldwide together.

Obviously, Farmer sold albums to the masses. What impressed the most yet, is the cult following she created. She and Johnny Hallyday are by very far the two French acts selling the most collectors type items, including some at very expensive prices. New album Anamorphosée lead single XXL entered to #1 mostly thanks to her fan base. With five weeks Top 10, it was one of the shortest living #1 hit.

The album wasn’t as lucky yet as it entered only at #2 due to Celine Dion blockbuster D’Eux stealing the first place from charts. It also lasted only three weeks inside the Top 10 and a mere seven before dropping from the Top 20, showing how misleading the #1 position from the lead single was. Farmer was almost back to promising act status, needing to hard work again to gain traction and sell well.

Second single L’Instant X, although peaking lower than lead one at #6, proved to be a much better support to the album, pushing it back up to #2 in January after the Christmas rush. The sexually explicit singles and cover surely discouraged some people from offering the album as a gift for the holidays, thus explaining the delayed climbs in early 1996.

Third single California did just about the same as the previous one, enabling the album to go back into the Top 10 a few months later and securing a Top 20 placing until September. At that point, the album quickly dropped, leaving the Top 50 by November. Fifth single Rêver strongly impacted airwaves yet, doubled with TV support and price reduction, the album climbed out-38-33-18-(Christmas)-5-2-1.

Again it may be noted how Anamorphosée failed to hit big during holidays season before exploding in January. It did reach #1, for the very first time, some 15 months after its release. Ironically, she replaced at the top Live A Paris by Celine Dion, the Live album corresponding to the studio album that initially prevented Farmer set to enter at #1. Celine Dion had time to get 3 chart topping albums during Anamorphosée chart life before this one peaked.

While such a stellar run on charts should grant Anamorphosée gigantic sales, it dropped out in 1997 before passing the million mark. The fact it had its best days in low periods of sales preventing sales to build as fast as it could have done. Certified 2xPlatinum during 1996, the album had to wait until 2009 to be certified Diamond.