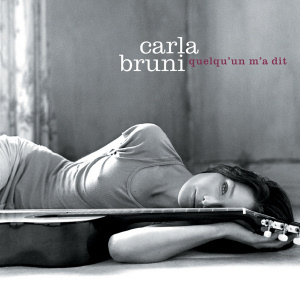 At first one wouldn’t compare Carla Bruni to Yannick Noah. Looking at it more closely, not many people have been able to be incredibly successful in a very exposed domain, then succeed in outstanding fashion in music area before representing France country at the highest level on the third part of their lives, as those two personalities did.

A worldwide recognized modeling figure, Carla Bruni turned into a successful lyricist in 2000 when she wrote most songs of Si J’Etais Elle  album by Julien Clerc, one of the bestselling French acts of all-time. Not many were expecting that much of a success for Carla Bruni own debut album, 2002 release Quelqu’un M’A Dit. This time it was her who called a well known name on her side as the album producer was no other than  Louis Bertignac, former guitarist of legendary band Téléphone.

The album went on an extensive run of two years before being excluded, almost completely on the back of a single song, the title track Quelqu’un M’A Dit. The smooth hit has been a sizeable radio hit worldwide and remains today as the most heard catalog French song on Spotify with over 21 million streams as of 28/01/2016.

Never certified by the SNEP in France nor by the IFPI in Europe, it looks difficult to gauge sales of this album. Outselling Kyo’s Le Chemin in 2003 Year End Chart being #3, which shipped 800,000 copies that year, we start to get a better view of its best year. With slightly higher retail sales and slightly lower extra shipment to answer Christmas buzzed market (Kyo album did 17-13-9-2 in December to Carla Bruni 34-28-23-10), the album  Quelqu’un M’A Dit did around 800,000 copies in 2003.