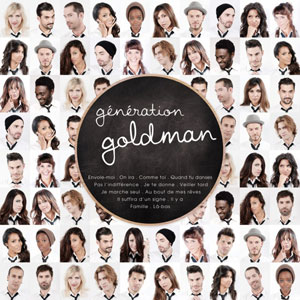 Nostalgia has always been a trademark of France music industry: Older you get, better you sell, and more rewarded is your discography. Among those acts deeply loved by French public is Jean-Jacques Goldman, once nicknamed the French Michael Jackson. From mid-80 until 2001, every album he released sold over 1 million copies. He broke his solo career in early 90s despite an incredible fame at the time, getting into a trio with Carole Fredericks and Michael Jones, both nowhere near as popular as him, and still sold over a million of both albums released with them.

When he was still too tired to release a new solo album, he wrote music for others, including Celine Dion two main French albums D’Eux and S’Il Suffisait d’Aimer. Patricia Kaas, Yannick Noah, Florent Pagny, Gérald De Palmas, Isabelle Boulay and Patrick Bruel all managed million selling albums thanks to Jean-Jacques Goldman master input. In total, when releasing 2 million selling albums already put you on an elite club in France, Jean-Jacques Goldman has been responsible for the ridiculous total of 19 million sellers within 18 years.

Goldman’s success in France is impressive but I don’t understand this : “Patricia Kaas, Yannick Noah, Florent Pagny, Gérald De Palmas, Isabelle Boulay and Patrick Bruel all managed million selling albums thanks to Jean-Jacques Goldman master input. In total, Jean-Jacques Goldman has been responsible for the ridiculous total of 19 million sellers within 18 years. ” Bruel and Boulay never worked with Goldman, as far as I know. He wrote one obscure song for Noah and he co-wrote a song for Pagny that was a minor hit. Clearly he had nothing to do with their million-selling albums, or am I… Read more »

Hi Analord! You are almost entirely correct, back then I made two lists of million sellers from Goldmans and then mixed them in the comments. If we look at each of them, for De Palmas it’s very clear his success is down to JJG. He was a one-hit wonder back then, his previous album had peaked at #32 only and his Diamond album started at #34. Then Goldman’s song J’en Rêve Encore started gaining airplay, became his largest career hit and shot the album to a never ending run inside the top 10. Of course it got additional hits, but… Read more »

“Ultimately, and with no disrespect to the inherent talent of all of them, I tend to see these 5 artists as some kind of a writing and production team led by JJG.” Allow me to strongly disagree here 😉 As far as I can tell, there’s no evidence that Robert Goldman or Erick Benzi didn’t write the songs they’re credited for on their own, so I don’t think JJG should receive any credit for them. As for De Palmas, my point was that lyrics are secondary, I guess there are exceptions like rap music for example, but in general I… Read more »

Oh I think I was very unclear in my post! There are no doubt Robert Goldman and Erick Benzi wrote the songs for which they are credited for. My point was that they were discovered and ‘trained’ by JJG, and he most likely adviced them on some songs even later on. He also was very cautious with projects he accepted, when he was credited for something, chances are he validated the entire composition-recording-mastering. Basically, without JJG there would have been no RG or EB, and even after he made them break through they worked mostly on projects on which singers… Read more »