How to use Discogs information?

The usage of the Discogs data is pretty straightforward. We only need to read the number of persons who own a record at the right of the screen inside the Statistics section. To avoid confusion, there is a pair of things to know yet.

Most international albums have multiple Releases on Discogs. For example, an album that got issued in LP, CD and Cassette in the US and Canada will have 6 such releases. All of them will have a specific number of owners. Below screenshot shows the number of releases for the early ABBA studio albums. 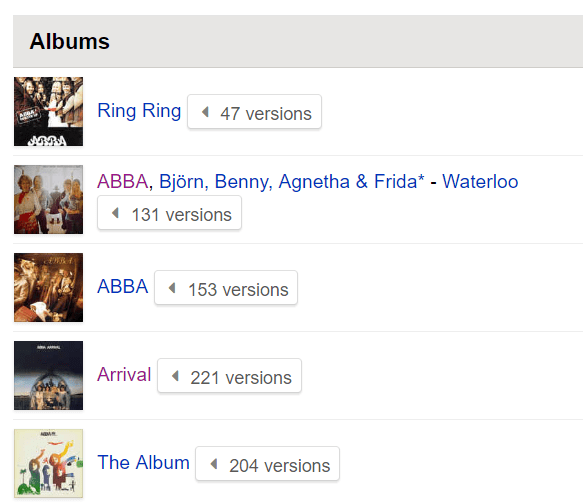 To properly list these albums, merging all versions together, a Master is defined. The master has a number of owners that is the cumulative tally of owners of all its versions. The master version will be typically the first that was entered inside Discogs’ database, so it can be a very minor one. We need to be cautious on search screens because masters can pop up in the middle of proper versions. For example, if we search for the most owned album in Mexico, Deep Purple‘s  Now What?! comes on top in spite of only 10 owners from versions of that country. It’s down to the fact that it’s Mexican CD was the first entered, so it’s master is located there only.

There is many ways to not mix masters with releases though. First, they are notified inside the URL itself: 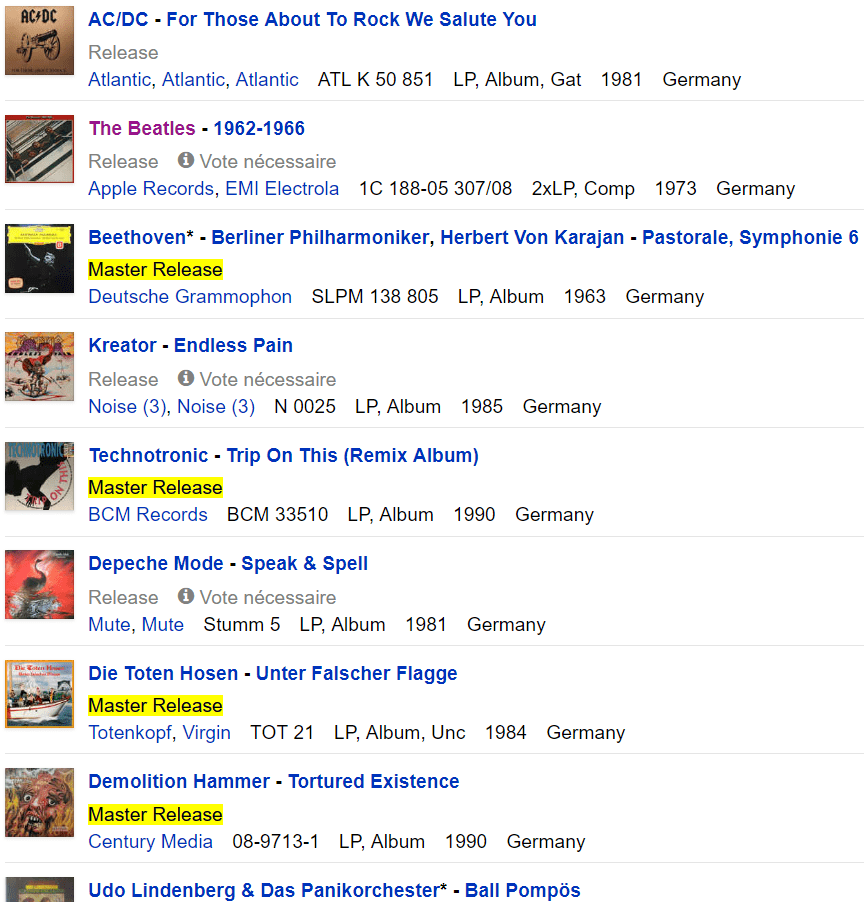 In addition, it’s possible to filter for main reference (master) or releases both from links at the top of the screen and by manipulating the URL. Links’ parameters are listed at the end of the article.

Most main markets have their own production lines. It isn’t the case for smaller markets. In the past, even relatively decent markets still relied a lot on imports from elsewhere. While digging into Elvis Presley‘s statistics, I saw German versions of many early albums owned by a lot of users. That’s down in part to Germany being the country that uses the most Discogs in proportion to its market among the top 5 global markets. It’s also due to the fact that in the 50s and the 60s the country was producing and shipping copies of most albums to Austria, Switzerland, Benelux and markets from Eastern Europe.

There is also units produced in a country exclusively to be sold elsewhere. One of the most owned Canadian version of a Presley‘s album is the Pickwick 1975 issue of the Christmas Album that was sold in reality in the US.

Sorting searches by most collected items

The advanced search of Discogs enables to filter on many parameters. Then, the results screen includes a dropdown list that permits you to sort by most owned items. Below is the list of most relevant filters to add directly inside the link to make it faster.

By default it is set at all, meaning it searches for everything, from albums to singles, masters to releases, artists to labels. You can set it at type=release for specific versions of records or type=master for merged versions of a record.

It is possible to add &country= to the link. Then, you can add US, UK, Europe, Germany, Brazil, or whatever. For example, you may be interested in getting the most collected releases from Yugoslavia. The link, and the results: 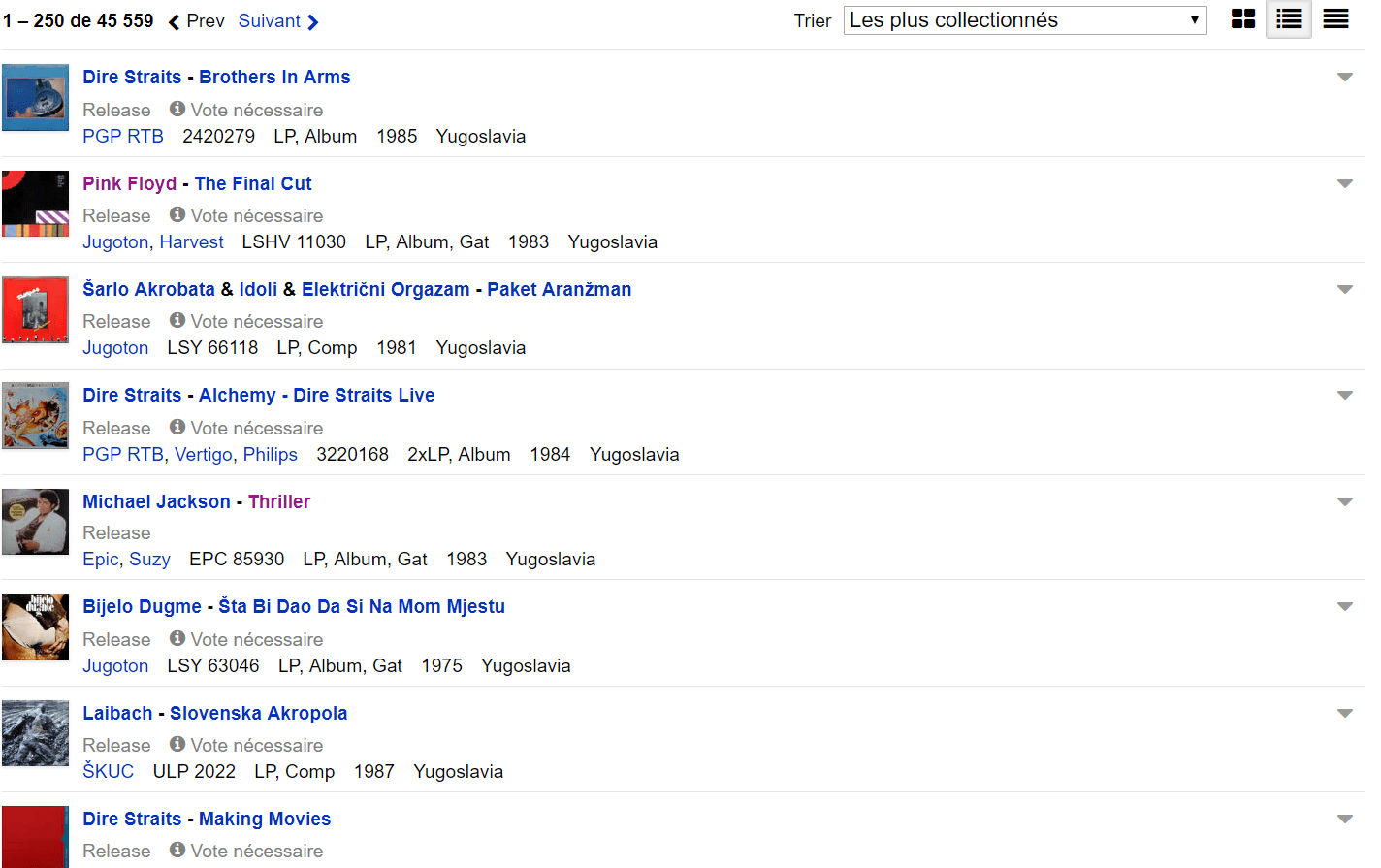 NB: “Les plus collectionnés” means “The most collected”

We hardly ever knew a thing about Yugoslavian market and in a second, we get that insightful list. Thriller had shipped 112,000 units there by June 1984 as per Billboard. All its Yugoslavian releases add for 479 owners on Discogs. Dire Straits’ Brothers in Arms is more in line with tastes of collectors, but its 644 owners still suggest it topped the 6 digits mark in that market which is absolutely huge.

I only listed a few albums but as displayed the ranking includes over 45,000 versions of records. Also, I randomly displayed results for Yugoslavia, but the same can be listed for virtually every country which ever produced records. I’m sure you are now starting to see how truly insanely good this tool is.

Since formats are collected on different proportions, it makes sense to filter by them using the &format= string plus the format name. You can enter almost anything on it: 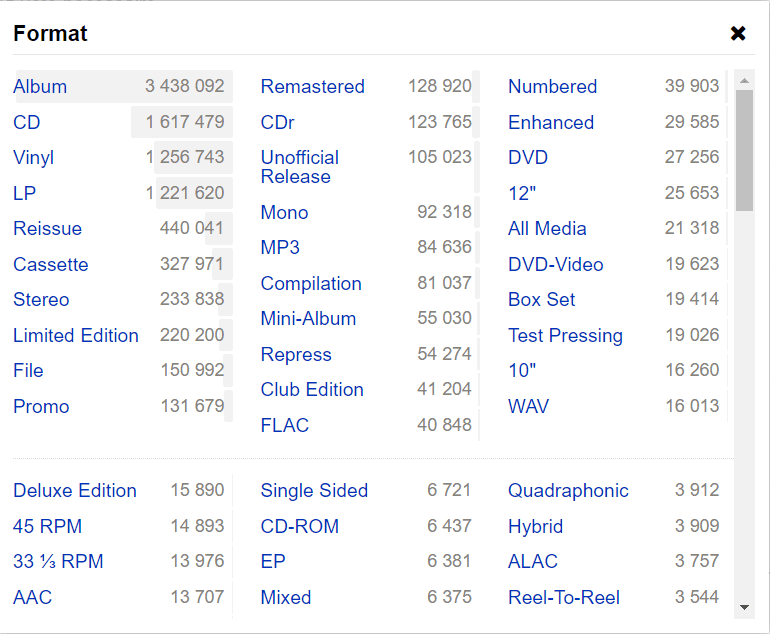 Very easy filter, you only need to add &year= with the year. Below are most owned albums (masters) from 1966 with no surprise at all: 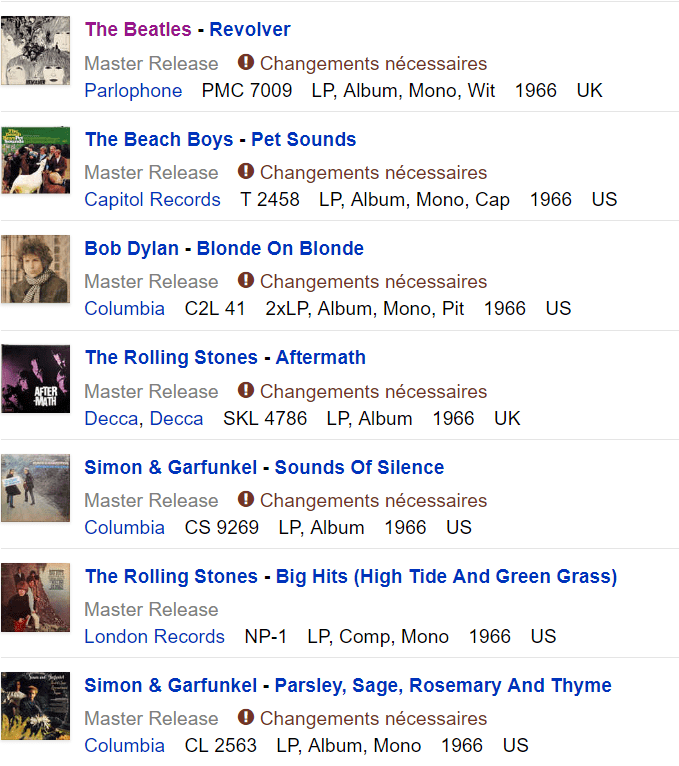 Now we get something truly unexpected. Filtering on a label may sound useless. What if that label is RCA Music Service, the ancestor of the BMG Music Club? You barely need to add &label=RCA-music-service and see: 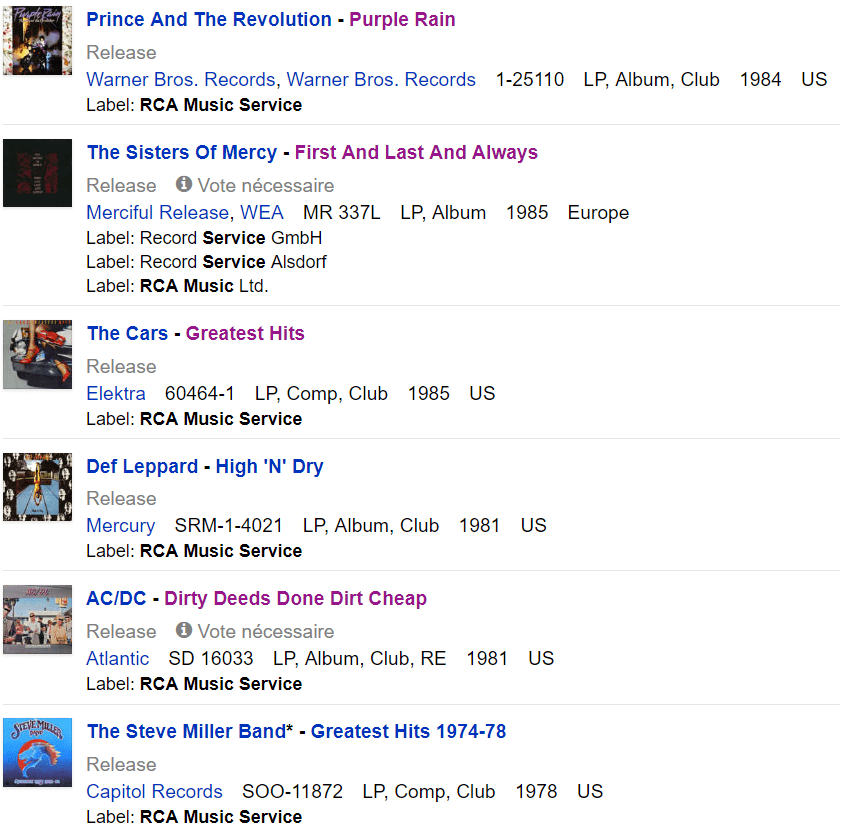 Obviously, we need to ignore Sisters Of Mercy who only happen to have all three words (RCA, Music, Service) on their label name. Apart from that technicality, we see the most owned versions from the club about which we knew nothing until now. Prince‘s Purple Rain emerges at the top, followed by the Greatest Hits of the Cars.

All albums listed minus High ‘N’ Dry gained multiple platinum certifications from the RIAA when all club sales were allowed in 1994. Interestingly, the Def Leppard album hasn’t been audited since 1992, meaning it is undoubtedly undercertified for very long. The same lists can be displayed for BMG Direct Marketing (the manufacturer of the club) and Columbia House. They are respectively led by Dirty Dancing and Phil Collins‘ But Seriously.

Of course, you may also be interested in looking for stats of a specific artist. You can get into very detailed searches. Below is the most owned Madonna‘s LPs in the Philippines. 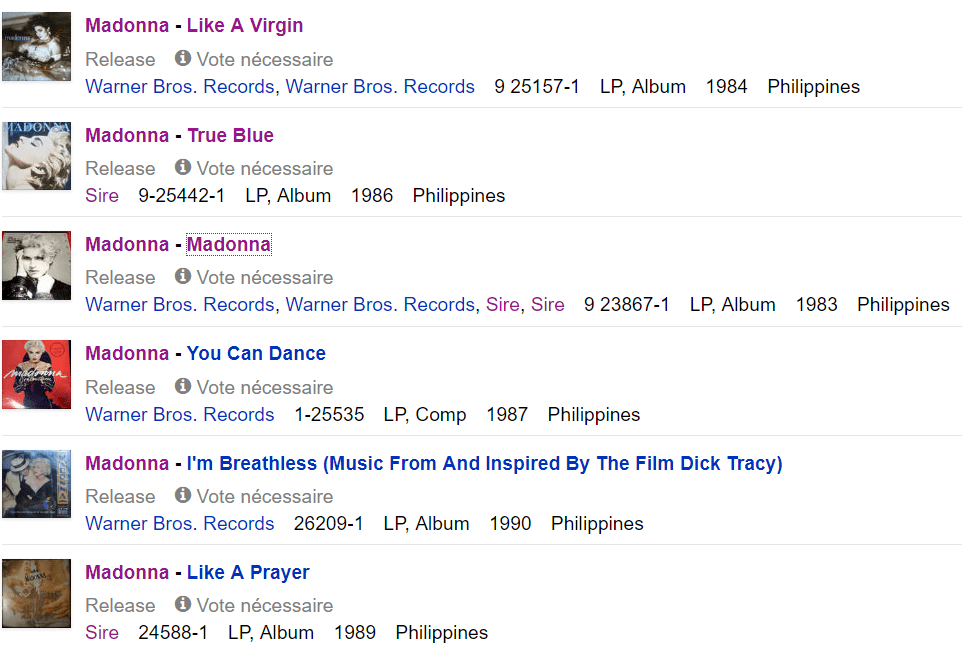 Like A Virgin leads the way with 40 owners against 39 for True Blue. You can go deeper and wonder what it means to get this number of owners from the Philippines. To do that, you only need to remove the filter Madonna and add year=1984 and then year=1986. Both albums are 3rd of their respective year. That being said, the soundtrack Footloose leads 1984 with a monstrous 668 owners, which speaks volume about its sales there. As a comparison, the count of Thriller from the Philippines stands on 122.

Estimates are always very tricky and filling in unknowns is undoubtedly the hardest part. It’s already great to have indirect sales indicators like the market size, performance patterns of the artist and popularity of each song per country. To get direct figures like the ones on Discogs, proportional to real sales, is an unexpected gift. Even more when it concerns obscure releases. Their statistics provide us countless of incredible data. The following article will present concrete examples of its usages from the discography of Elvis Presley. On his case alone, it solves estimation holes for several hundreds of albums. Stay tuned!