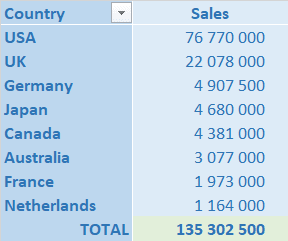 The US and the UK are far and away the biggest singles markets for Presley. It’s the result of both a higher popularity there and markets much larger than anywhere else. Obviously, he was also popular in Canada but singles have never been that big there. In Germany, many of his singles failed to chart but he got several high points with It’s Now Or Never, Wooden Heart, Good Luck Charm, (You’re) The Devil In Disguise, Kiss Me Quick and In The Ghetto, all at 200,000 units or more. The story is similar in Japan with several hits from his soundtracks performing well time to time.

In Australia the success arrived later than in other English-speaking countries but then he sold bucket loads from 1960 onwards. These are the only 6 markets where the singer sold more than 3 million physical singles. In France and Italy he hasn’t make it because of a lack of success. In other countries like the Netherlands and in Scandinavia he was massive but the market was simply too weak. Please notice that Scandinavian countries aren’t listed separately but he sold more in Sweden than in the Netherlands. Career sales in the 500,000-1,500,000 range have been registered in countries like Denmark, Norway, Switzerland and Belgium.