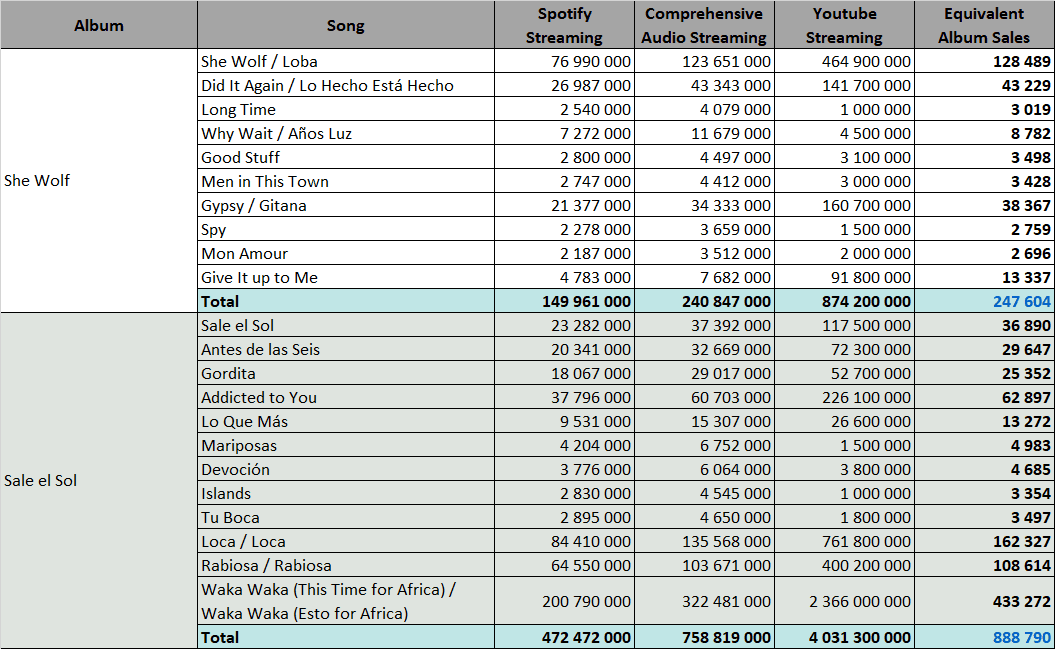 Independently of the consistency of albums tracks or the heights reached by singles, the most striking element is how all albums until She Wolf end up with 200-480,000 equivalent album sales.

This all changes with Sale el Sol. For a mostly Spanish album issued in 2010, its results were absolutely extraordinary in terms of sales. That success is confirmed by its streaming figures too. Both language versions of Loca combined add for 84 million while Rabiosa is on 65 million. Logically, Waka Waka does even better at over 200 million. They are also monsters on YouTube with combined views for this album topping 4 billion. These amazing scores add for 889,000 EAS. It is only a matter of time until it reaches 1 million units from streams alone.

This website uses cookies to improve your experience while you navigate through the website. Out of these cookies, the cookies that are categorized as necessary are stored on your browser as they are as essential for the working of basic functionalities of the website. We also use third-party cookies that help us analyze and understand how you use this website. These cookies will be stored in your browser only with your consent. You also have the option to opt-out of these cookies. But opting out of some of these cookies may have an effect on your browsing experience.
Necessary Always Enabled
Necessary cookies are absolutely essential for the website to function properly. This category only includes cookies that ensures basic functionalities and security features of the website. These cookies do not store any personal information.
SAVE & ACCEPT
wpDiscuz
73
0
Would love your thoughts, please comment.x
()
x
| Reply