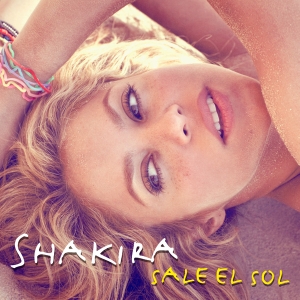 If Shakira has been able to reach decent sales with all her albums thanks to solid singles, she never reproduced a success as big as the one of 2001 album Laundry Service. During the summer 2010 yet she became as hot as ever thanks to the World Cup anthem Waka Waka. The song was an outstanding smash, selling a total of 373,000 copies in 2010 making it easily the #1 not only on weekly charts but for the entire year, not even mentioning the fact the single spent 86 consecutive weeks inside the Top 100.

Although the song wasn’t properly part of a Shakira album, it was introduced on Sale El Sol album that came out a few months later along with lead single Loca. It was three weeks #2 in the Singles chart that was still a physical single chart only, but it spent four weeks at #1 in the Digital front ending as the #5 top seller of the year with 134,400 digital sales – plus 9,000 physical units.

With two terrific hits on it, the album obviously responded well. Despite the market had significantly dropped in recent years, the album moved 237,000 copies in its 11 weeks on charts during 2010, some 21,500 copies on average per week while her past albums all debuted at 8,000 units give or take 2,000 units. Those sales were achieved thanks to a #2 debut, only topped by strong local act Eddy Mitchell, but once fan base effect vanished Sale El Sol went to #1 for two weeks. Even the huge fourth quarter competition and Christmas surge of adult contemporary acts haven’t push down the album that never dropped below #6 during 2010.

Rabiosa #6 hit gave even more legs to the album that was part of the Top 20 for 41 of its first 42 weeks. This huge consistency during the first three quarters of 2011 brought the album an additional 209,000 sales for the year, a cumulative total of 446,000 units. In December 2011, the album was certified Diamond for 500,000 copies shipped overall.

For very long the standard in France music industry was to release a live album at the end of a very successful era. This is exactly what has been done after the smash of Sale El Sol. The album Live From Paris was released in December along with the single Je L’Aime A Mourir, a huge classic song from legendary local singer Francis Cabrel. It was one more huge smash for Shakira in France as the song topped the single chart for 7 weeks, her sixth #1 hit in total.

The live album debuted at #32 during December rush and then climbed all the way to #8 in January. By the end of 2011 it had sold 91,000 copies and went Platinum for 100,000 copies shipped. If Sale El Sol was naturally out of charts by April 2012 some 18 months after release, Addicted To You was still sent to radio. It peaked at #15 and impressively sent the album back inside the Top 40, generating 52,000 more sales for it during 2012. In total, Sale El Sol was up to an impressive 498,000 copies scanned despite those figures not being fully comprehensive.

The catalog of the Colombian act was still alive too as a 2-DC set containing both Laundry Service and She Wolf went to #159 in New Albums Chart in 2011. On its side, Sale El Sol kept re-entering the album chart until May 2014.