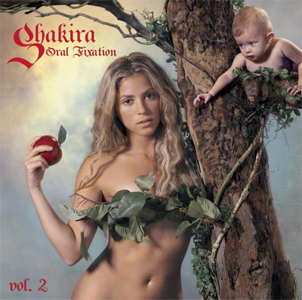 Nearly four years after the initial release of the previous album, Shakira came back in 2005 with an ambitious project titled Oral Fixation. It consisted on two volumes, released within’ a few months, the first one in Spanish, Fijación Oral, and the second one in English.

The Spanish part came out in June, led by duet song La Tortura with Alejandro Sanz. It was a very solid hit for Spanish songs standards, peaking at #7 with a 9 weeks Top 10 residency. The album peaked at #6 – on 8,478 sales – only, which may be regarded as disappointing considering the large sales of the predecessor. For a Spanish record yet that was still a pretty good result especially since it held 7 weeks Top 10 and an impressive 61 weeks on charts. The album registered 101,000 sales over the counter in 2005.

The Vol 2 English album, Oral Fixation, was a major flop upon release. Issued during the heavy December period and with no supportive single, the set debuted at an awful #37 position with 6,120 sales scanned in its first week and 35,000 by the end of the year. The lead single Don’t Bother, ultimately released in late January bombed as well with a #24 peak position. It was also unable to sustain the interest on the album which was way down to #197 by mid-March.

The album needed a miracle to be saved. The miracle was named Hips Don’t Lie. In May 1st 2006, the album was reissued with two new songs, one of them being the hit featuring Wyclef Jean. The single performed way, way better than Don’t Bother, debuting at #1 and charting 13 weeks inside the Top 10. Oral Fixation new edition peaked at #8 on 7,296 sales with 14 weeks Top 30, fully recovering from the initial failure.

In 2007, Shakira gained a third France #1 hit thanks to Beautiful Liar duet with Beyoncé. It was part of the latter artist B’Day album.