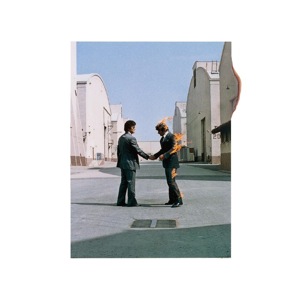 Only a few months after the buzz around their previous album that managed to become the most successful foreign album ever to that point slowed down, Pink Floyd came back with heavily awaited Wish You Were Here.

When first released in September 1975 the album debuted right where it was expected, at #1 in the monthly chart. Lead single in France was Shine On You Crazy Diamond (Parts I–V) and turned into a big hit. Have A Cigar was issued almost at the same time to help selling the album. This is exactly what it did, only losing battles to other giants. In October, it was the #2 album, only topped by new Johnny Hallyday album. The end of the year was dominated by Jean Ferrat, a poet singer selling incredible amounts of records at the time.

Wish You Were Here was still comfortably in the top positions. In fact, until the summer of 1976 it never dropped below #7 position. By the end of the year sales were over 600,000 units. Obviously, as most of Pink Floyd albums, sales during the promotional campaign were not the be all and end all of the story. Successes during the following years, most notably the The Wall era, pushed sales further. At the end of 1980, the album was on an estimated 800,000 units, after which it added around 25,000 units per year until 1991. In fact, The Wall itself sold 35,000 units a year in the meantime while Wish You Were Here has been constantly selling 65% of its sales.

Those catalog results enabled this classic album to be certified Diamond as early as in 1989. As this award was introduced in 1988, when may wonder if sales weren’t over 1 million for several years. There is three facts which tend to prove the album really passed the mark during 1989.

The first one is the chart performances of the album itself. It hasn’t dominate enough the market in 1975 to push it too high giving the relatively low market of that period. The second reason is the case of The Wall itself, that was just slightly weaker when first released, with equivalent catalog sales – yearly rate higher but it had less years to accumulate them – but had yet to be up to Diamond in 1989 as it was certified 3xPlatinum. The third reason is that both a new Pink Floyd album, A Momentary Lapse Of Reason, was certified Platinum in 1988 and label partner Yves Duteil catalog album La Tarentelle was certified Diamond, meaning Pathé-Marconi checked their best sellers for an audit that year and the British band was a big favorite to be verified.

The big catalog sales of the band in 89-91 sent the 1975 smash to 1,1 million. After that date, it added an estimated 200,000 units until 2002 included. From 2003 to 2008, with Echoes compilation already released and the lack of activity from the band, the album sold 53,000 units as per GFK. Since catalog albums are eligible anew with the change of rules of 2011, the album charted every year, peaking at #34 after the release of the remastered edition. It sold 75,000 units in the process.

Le Figaro was probably also John2000’s source and he just didn’t remember it when I consulted him. Now problem solved. I should have trusted you from the first time, haha. I can’t object anything.

I can confirm you Wish You Were Here was certified Diamond along with five other albums in 1989 yet as for both of those years Le Figaro magazine also covered that news. You can find the list of 1989 Diamond albums online on their archive: https://books.google.fr/books?hl=fr&id=90g7AQAAIAAJ&dq=floyd+wish&focus=searchwithinvolume&q=floyd+wish

I promise this and The Dark Side Of The Moon are the last albums I’m going to object. lol.

This is one of the albums I was waiting for. Assuming it was indeed on 1 million by 1989, there isn’t much I can’t complain. The only think I’m not sure is how legitimate that Diamond award was. I mean, what is the source for that? I remember I had some chat with John2000 (from UKmix) and he told me he had that diamond on his database but, when he want back to his original source (he mentioned the “Platine magazine), he couldn’t find it. He started to doubt where he had got that from. So I would like to… Read more »