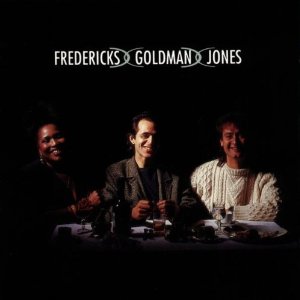 After a decade of smash albums and singles, Jean-Jacques Goldman dropped in December 1990 his first non-solo record since his early Tai Phong years.

Being the biggest star of French music scene, putting the name of your guitarist, Michael Jones, and your choir member, Carole Fredericks, at the same level as yours on your records cover is quite surprising. That perfectly fits with Goldman anti-star personality yet. He was just so big that the very first official certification the band got for this album, a Platinum (300,000) award received upon release, was awarded to the artist “Jean-Jacques Goldman”, completely ignoring the other two singers.

Considering his last studio album was released over 3 years earlier and was a 18 weeks #1 record, expectations on the eponymous debut of the trio were huge, explaining why it was instantly Platinum in 1990. Officially, it debuted in the first chart of 1991 and retained a Top 10 position all year long.

Sales-wise, by June 1991 sales topped 600,000 while at the very end of the year the record passed the million mark, being certified Diamond. The various months Top 20 in the first half of 1992 and the album resistance the rest of the year added a calculated 240,000 units. Necessarily, some copies sold in 1992 got shipped in the 1991 fall but that made up for the fact the album hasn’t stop at 1 million exactly that year.

The live album Sur Scène, released in December 1992, took over catalog sales of the studio album as it contained both songs of Fredericks Goldman Jones as well as several of Jean-Jacques Goldman biggest solo hits. It still sold an estimated 150,000 copies in 1993-1999 years along with the success of Rouge album and while waiting for the first proper best of covering this album, Pluriel, released in 2000. The never ending appeal of the singer enable this release to still sell some copies on a yearly basis.