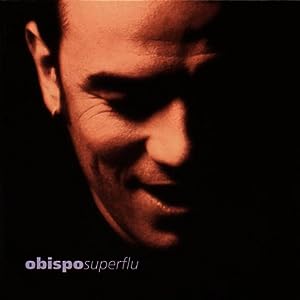 Often compared to Jean-Jacques Goldman because of his ability to score hits both as a singer or as a songwriter for other popular artists, Pascal Obispo struggled a lot before making a real impact.

A debut album selling close to null in 1990, a second one getting Gold status in 1992, a third coming close to Platinum within’ its promotion campaign in 1994, Pascal Obispo fame was definitely growing during early 90s, although still someway modest. Superflu, his fourth album from 1996, was his first Top 10 album when it debuted at #6. It was a bit of a disappointment yet considering the recent rise of the artist and the good reception of Personne lead single. It held well in the Top 25 during the Christmas rush.

Ceremony awards in February gave the album a serious boost, jumping to #2 from #17. It was the start of eight months firmly inside the Top 15 mostly supported by crossover hit Lucie. It never hit the top spot yet being blocked three times by Andrea Bocelli monster album Romanza.

By September, sales of Superflu were over the 2xPlatinum status although it happened anytime from July to that point since no Sony BMG audit were performed in-between. Along with Lucie, the most aired song in France was Florent Pagny huge hit Savoir Aimer, also written by Pascal Obispo. Following official certification arrived in March 1998 with the Diamond award, although the album passed the million in mid-February. Still Top 10 at that point, it was the last months of large sales for this release as Live 98 quickly took over in May, when Superflu was on 1,1 million copies sold.

Although the pace of sales got reduced afterwards, the album was still relevant. By October 2000, the album had sold 1,3 million overall, including over 100,000 abroad. It kept selling well in 2001 and 2002 often re-entering charts but failed to sustain this appeal in later years, adding about 140,000 units since last publication.